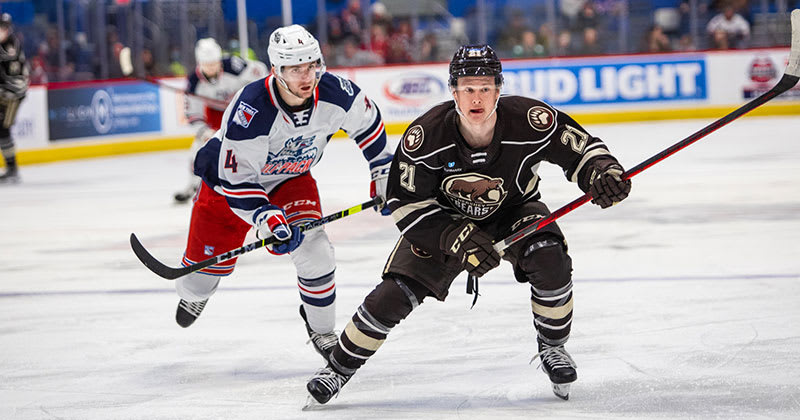 Wolf Pack Down Bears 7-3 in Hartford

The Hershey Bears dropped a 7-3 decision on Saturday night against the Hartford Wolf Pack at the XL Center. Shane Gersich and Dylan McIlrath both scored their first goals of the season for the Chocolate and White. Hershey's record shifts to 6-5-2-1.

Hershey's penalty kill went a perfect 3-for-3 in the opening stanza, but Hartford tallied twice to carry a 2-0 advantage into first intermission. At the 6:18 mark, Anthony Greco raced off the bench and joined an offensive attack along the left wing. Greco fielded a cross-ice pass from Braden Schneider and buried his fifth goal of the season. At 12:13, Patrick Khodorenko doubled the Wolf Pack advantage to 2-0 after capitalizing off the rush from the right wing. The Wolf Pack led in shots 9-5 after 20 minutes.

The Bears turned the game around in the second period with three unanswered goals to grab a 3-2 lead before intermission. Only 93 seconds into the stanza, Eddie Wittchow forced a turnover in the slot, and Shane Gersich snapped home his first goal of the campaign. Hershey found the equalizer at 10:06 with Mike Sgarbossa's sixth goal of the season. Lucas Johansen sent the puck near the cage from the left point, and a perfect redirect by Sgarbossa past Hartford goaltender Keith Kinkaid evened the score.

Before the period concluded, the Chocolate and White turned a prolonged offensive zone shift into a 3-2 advantage. At 15:13, Dylan McIlrath blasted home his first goal of the season from the center point. Gersich and Michal Kempny earned the helpers. Shots after 40 minutes were 19-17 Hershey.

Hartford stormed back in the third period with five unanswered goals to grab a 7-3 victory. Lauri Pajuniemi scored twice within 64 seconds to turn a 3-2 deficit into a 4-3 lead at 2:53 and 3:57. P.C. Labrie tallied his second goal of the campaign to open a 5-3 cushion at 4:24. Jonny Brodzinski also scored twice in the final frame notching a power play and shorthanded goal to round out the scoring.

The Hershey Bears return to action on Sunday, Nov. 20 against the Charlotte Checkers at GIANT Center. It's Hockey Fights Cancer Night featuring specialty themed lavender jerseys that will be auctioned off postgame. Beneficiaries for the 2021-2022 season are Leukemia & Lymphoma Society, Hospice of Central PA, Lebanon County Library System, and Dauphin County Library System. All fans will also receive a rally towel presented by Penn State Health. Ticket information is available online at HersheyBears.com.