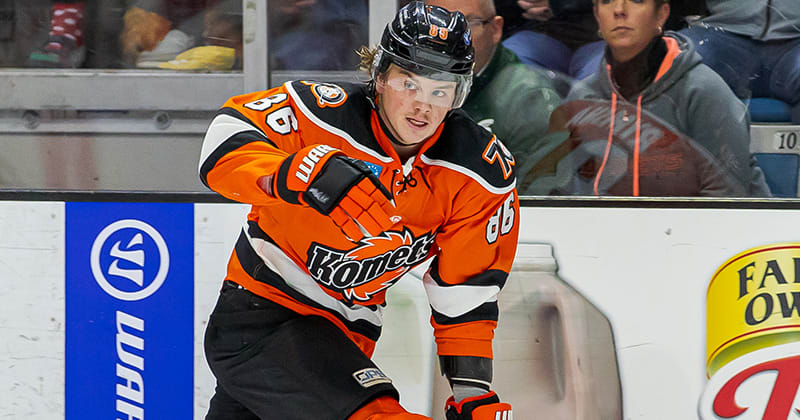 Protas, 20, made his NHL debut for the Capitals on Nov. 1 at Tampa Bay. He has five points (1g, 4a) in eight games with Hershey this season. The 6’6”, 225-pound center recorded 18 points (10g, 8a) in 58 regular season games with Dinamo Minsk during the 2020-21 season. Protas was then re-assigned to Hershey on Mar. 18 and made his AHL debut on Mar. 31. He recorded seven points (2g, 5a) in 16 games with the Chocolate and White in 2020-21. Additionally, Protas represented Belarus at the 2021 IIHF World Championship, recording two assists in six games. The Capitals selected Protas with their third round pick, 91st overall, in the 2019 NHL Draft.

Massie, 24, has skated in one game with South Carolina, posting a goal and an assist. The St-Lazare, Quebec native has played in 29 AHL games, all with the Springfield Thunderbirds in 2019-20, posting five points (3g, 2a). The 6'1", 179-pound defenseman played three years at the University of Vermont and was originally a sixth round selection by Carolina in the 2015 NHL Draft.

Rymsha, 23, joins the Bears from Fort Wayne of the ECHL. With the Komets, he has posted four points (1g, 3a) in five games this season. The 6', 180-pound forward has appeared in 38 career AHL games with Ontario, notching five points (1g, 4a). With the Reign in 2018-19, he was teammates with current Hershey captain Matt Moulson. Rymsha made his NHL debut with the Los Angeles Kings last season, appearing in the club's last game of the season on May 13 versus Colorado. The Huntington Woods, Mich. native was selected in the fifth round of the 2017 NHL Draft by Los Angeles.

The Chocolate and White return to action tonight for the club's Hometown Heroes Night versus Lehigh Valley. The puck drops at 7 p.m. at GIANT Center and the first 5,000 fans will receive a Fan Clapper courtesy of Penn State Health. Tickets are available for this can't-miss event online at HersheyBears.com or at the GIANT Center Box Office.