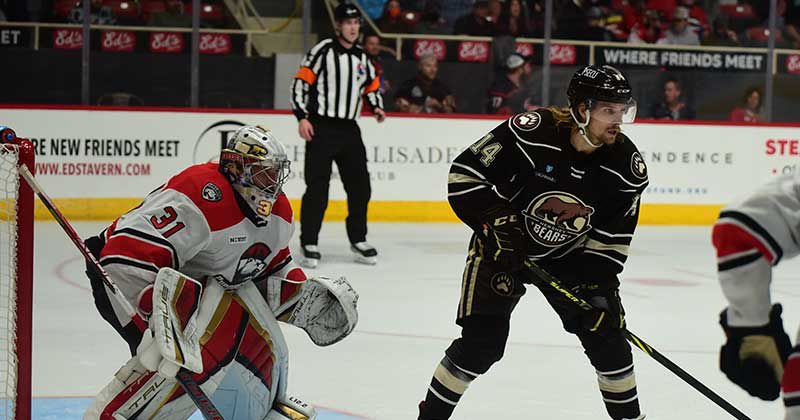 The Hershey Bears dropped a 5-3 decision on Friday night at Bojangles' Coliseum for their first defeat of the 2021-22 regular season. Hershey's power play went 2-for-6 and the penalty kill put forth a perfect, 4-for-4 effort. Both teams conclude a back-to-back set on Saturday, Oct. 23 at 6 p.m.

Aliaksei Protas opened the scoring for the Chocolate and White 5:28 into the first period. On a 2-on-1 offensive rush, Axel Jonsson-Fjallby centered a perfect pass across for Protas to finish his first goal of the season. Only 1:15 later, Charlotte answered following an odd-man rush of their own. Alexander True held and fired a shot from the right wing past Pheonix Copley to even the score. Max McCormick provided the Checkers a 2-1 advantage at the 14:28 mark of the opening stanza. Shots after 20 minutes were 14-10 Hershey.

The Bears power play unit struck twice in the second period to regain a 3-2 advantage. First, Mike Sgarbossa scored a 5-on-3 power play goal from the bottom of the right circle at 9:42, followed by Garrett Pilon's second goal of the season at 13:47. On the rebound of a Mike Vecchione shot, Pilon stuffed the rebound home past Checkers goaltender Christopher Gibson. Before the second period expired, Charlotte once again found the equalizer. After a foot race negated a pending icing, Aleksi Heponiemi buried his own second chance past Copley at the 15:39 mark. Shots after 40 minutes were 27-17 Bears.

Despite being held to only three shots in the third period, Charlotte scored twice and salvaged a 5-3 victory. Following a turnover, McCormick scored his second goal of the night and the eventual game-winner at 15:14. Minutes later, Matt Kiersted tallied his first professional goal in his AHL debut by icing the empty netter with 1:01 left.

The Hershey Bears conclude their two-game weekend set with the Charlotte Checkers tomorrow at Bojangles' Coliseum. Puck drop is slated for 6 PM. Voice of the Bears Zack Fisch will have the call on the Bears Radio Network.