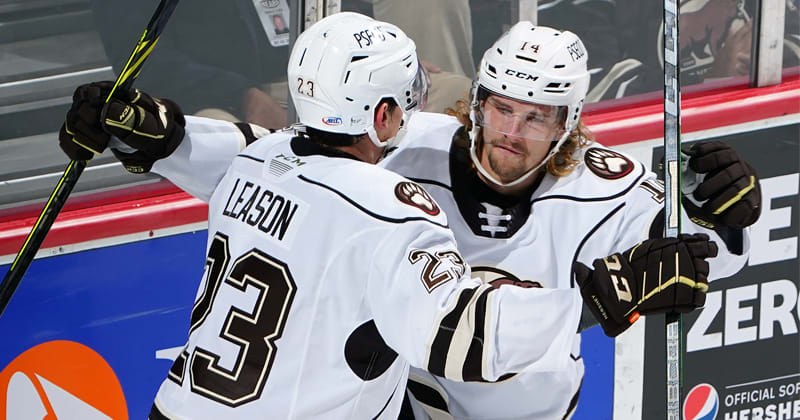 The Hershey Bears opened the club's 84th season in the American Hockey League last weekend, earning a pair of victories to start the 2021-22 campaign. The Chocolate and White will take its 2-0-0-0 record on the road this week for a pair of games versus the Charlotte Checkers. The club's next home game comes on Wednesday, Oct. 27 at 7 p.m. versus the Syracuse Crunch.

LAST WEEK'S RESULTS:
Saturday, October 16: Hershey 5, Charlotte 2
The Hershey Bears returned to the GIANT Center in front of a full crowd for the first time in 594 days, and the home team didn't disappoint. Lucas Johansen opened the scoring at 3:31, and Brett Leason gave the Bears a 2-1 lead on the power play at 16:35 of the opening frame. The Bears outshot the Checkers 26-4 over the game's final two periods, and the Chocolate and White also got goals from Kody Clark, Mike Sgarbossa, and Garrett Pilon.  Sgarbossa and Pilon finished the night with three points (1g, 2a).

Sunday, October 17: Hershey 2, Lehigh Valley 1
The Chocolate and White closed out a perfect opening weekend with a win over rival Lehigh Valley on Sunday at GIANT Center. Forward Mike Vecchione opened the scoring, striking in his first game versus his former team, putting the Bears ahead at 8:49 of the first period. Axel Jonsson-Fjallby doubled Hershey's lead at 9:17 of the middle frame. Zach Fucale was strong in goal for Hershey with 23 saves, and Hershey went 8-for-8 on the penalty kill, including fending off a 6-on-3 attack in the closing 1:20 to secure the one-goal win.

The Bears return to North Carolina for the first time since Jan. 14-15, 2020. Hershey dropped a pair of contests on the road to the Checkers that weekend, losing 4-1 and 5-4. Hershey's last win at Charlotte came on Oct. 20, 2018 in a 2-0 victory. Vitek Vanecek stopped 20 shots to earn the shutout that evening.

2-0 AND MORE TO GO:
Hershey has started the season 2-0-0-0 for the first time in a decade. The last time the Bears opened a season with a pair of victories came during the 2011-12 campaign when the Chocolate and White started the season with three straight wins. With a win on Opening Night, Hershey won its first game of the season for the first time since 2015, and with the win coming on home ice, the Bears claimed their first Home Opener win since 2016.

ROLLING AT HOME:
With a pair of wins at GIANT Center this weekend, the Bears have won 12 straight contests on home ice, dating back to the 2020-21 campaign. The Bears have outscored opponents 41-17 in that stretch. Hershey has not lost on home ice since Mar. 14 of this year in a 4-1 defeat to Lehigh Valley.

CLIMBING THE LADDER:
With his 13-save victory last Saturday, goaltender Pheonix Copley is now tied for eighth place all-time in Hershey history with 71 wins. He will take sole possession of eighth place with his next victory, passing Vitek Vanecek and Phil Sauve, and he is two wins back of Braden Holtby, who ranks seventh in club history with 73 wins.

BEARS BITES:
A total of 13 different players registered a point over Hershey's first two games of the season...Lucas Johansen's goal last Saturday was his first since the 2018-19 campaign, when he tallied versus Utica on Apr. 13, 2019...Dating back to last season, Zach Fucale has won his previous five starts, allowing just nine goals in that span...Hershey went 11-for-12 on the penalty kill last weekend, good for a 90.9% success rate...Three players from Hershey's roster were sent to South Carolina (ECHL) on Tuesday, including goaltender Hunter Shepard, forward Ryan Dmowski, and defenseman Jake Massie.