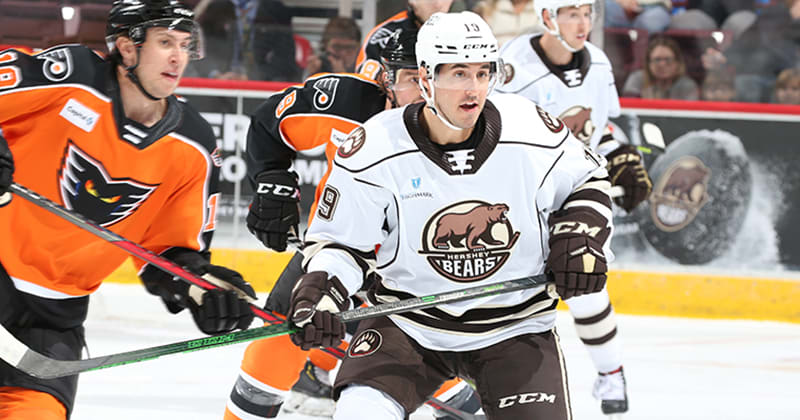 The Hershey Bears edged the Lehigh Valley Phantoms by a 2-1 margin on Sunday at GIANT Center. Hershey's penalty kill went a perfect 8-for-8, including an efficient kill of a 6-on-3 Phantoms advantage in the final minute. Hershey's home ice winning streak extends to 12 consecutive games dating back to last season.

Once a Lehigh Valley Phantom, Mike Vecchione opened the scoring to punish his former team. At the 8:49 mark, Tobias Geisser threw the puck on net, and Vecchione potted the rebound past Phantoms netminder Samuel Ersson. Shots after 20 minutes were even at 11-11.

Axel Jonsson-Fjallby earned the secondary assist on Hershey's first goal, and added the eventual game-winner in the middle frame. At the 9:17 mark, Jonsson-Fjallby doubled the Bears lead with a chip shot from a sharp angle that snuck through Ersson's five-hole. Brett Leason nearly scored a third goal for Hershey at the period's horn, but video replay ruled the clock expired a moment prior.

Down 2-0 late, Ersson raced to the Phantoms bench for the extra-attacker. Gerry Mayhew scored at the 17:30 mark to snap Zach Fucale's shutout bid. Fucale finished the night with 23 saves on 24 shots in addition to First Star honors. Garrett Pilon was sent to the sin-bin for interference with 2:02 left, and Geisser followed at 18:40 after clearing the puck out of play for delay of game. Hershey's penalty kill completed a perfect 8-for-8 night and 10-for-11 weekend to squeak out a 2-1 win.

The Hershey Bears return to action on Friday, Oct. 22 and begin a back-to-back road set against the Charlotte Checkers. Puck drop from Bojangles Coliseum is slated for 7:05 p.m. Voice of the Bears Zack Fisch will have the radio call on the Bears Radio Network.