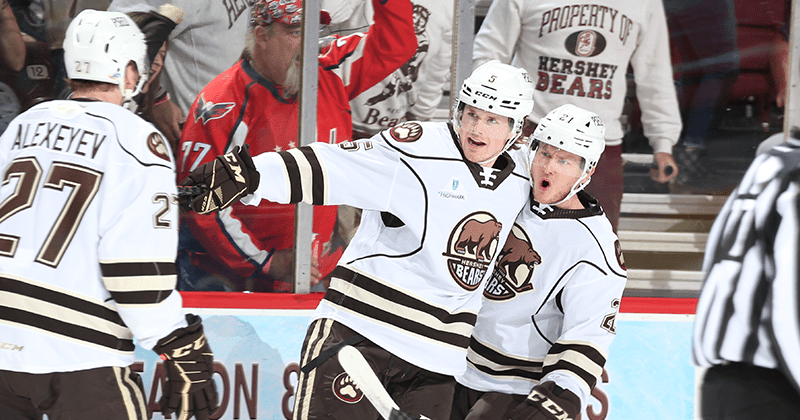 The Hershey Bears opened the 2021-22 regular season with a 5-2 victory over the Charlotte Checkers on Saturday night at GIANT Center. Five different goal scorers converted for the Chocolate and White, including two tallies on the power play. The Bears conclude a two-game weekend set on Sunday at 3 PM versus Lehigh Valley.

First goal of the season honors went to Hershey blueliner Lucas Johansen only 3:31 into the game. Garrett Pilon feathered a perfect pass across from the right wing, and Johansen raced towards the cage for the finish. Aleksi Heponiemi evened the score with a power play breakaway goal at 6:21 for Charlotte. Before the first period closed, Brett Leason converted Hershey's first of two power play goals after burying a rebound at the net front with 3:25 left in the frame. Shots after 20 minutes were 11-8 Checkers, but the Chocolate and White held Charlotte to only four shots on goal within the next two periods.

Kody Clark scored on the man-advantage at 2:43 of the second period for the eventual game-winning goal. Charlotte cut Hershey's 3-1 cushion to 3-2 courtesy of Alexander True at the 12:35 mark. In the third, Mike Sgarbossa and Pilon both hit pay-dirt to complete a 5-2 scoring line. Final shots on goal totaled 34-15 Bears. Hershey's special teams finished 2-for-6 on the power play and 2-for-3 on the penalty kill.

Pheonix Copley earned the victory in net for the Bears with 13 saves on 15 Charlotte shots. The Hershey Bears return to action on Sunday, Oct. 17 at GIANT Center. Hershey and Lehigh Valley will drop the puck at 3 PM to kickoff a 14-game season-series. It's AAA License Plate Night for the first 5,000 fans in attendance. Ticket information is available online at HersheyBears.com.