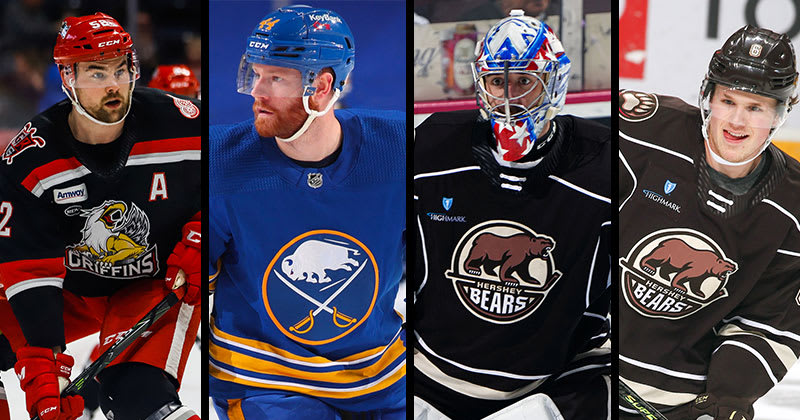 McIlrath, 29, is a veteran of 426 American Hockey League games, skating with Connecticut/Hartford, Springfield, and Grand Rapids, registering 90 points (23g, 67a), a +25 rating, and 903 penalty minutes in his AHL career. In 2020-21, McIlrath registered eight points (2g, 6a) in 29 games with Grand Rapids. He served as an alternate captain with the Griffins for the third straight season while posting a team-high 70 penalty minutes. The 6'4", 235-pound defender helped lead Grand Rapids to a 2017 Calder Cup title, posting five assists in 19 postseason games.

The native of Winnipeg, Manitoba has played in 66 career NHL games with the New York Rangers, Florida Panthers, and Detroit Red Wings, tallying five points (3g, 2a) and 121 penalty minutes. He most recently played in the NHL with Detroit, logging 16 games during the 2019-20 campaign. McIlrath was selected in the first round, 10th overall, in the 2010 NHL Draft by the Rangers.

Irwin, 33, appeared in 24 games last season with the Buffalo Sabres, registering two assists. He's a veteran of 383 career NHL games, posting 84 points (22g, 62a) with San Jose, Boston, Nashville, Anaheim, and Buffalo. He's also appeared in 47 career NHL playoff games, collecting four points (1g, 3a). He skated in all 22 of Nashville's postseason games in 2017, helping the Predators to the Stanley Cup Final. The 6'2", 189-pound blue liner has skated in 249 career AHL games, notching 119 points (27g, 92a) with Worcester, Providence, and Milwaukee. He played in the 2012 AHL All-Star Classic.

Shepard, 25, earns his first NHL contract. He appeared in three games for Hershey last season, finishing with a 3-0-0 record, a 1.00 goals-against average and a .969 save percentage. He recorded a shutout in his first AHL start, making 28 saves in a 2-0 victory over Lehigh Valley on May 2. The 6’1”, 210-pound goaltender also played in 21 games with Hershey's ECHL affiliate, the South Carolina Stingrays, compiling a 12-6-2 record with one shutout, a 2.55 goals-against average and a .922 save percentage. He helped South Carolina advance to the Kelly Cup Finals, registering a 7-6 record in the postseason.

Shepard turned pro last season following a four-year NCAA career with the University of Minnesota-Duluth Bulldogs. In 119 games with the team – which included an NCAA-record 115 straight games – Shepard finished with a 76-37-5 record, ranking first all-time in Bulldogs history in wins, goals-against average (1.94), save percentage (.922) and shutouts (17). Shepard won back-to-back NCAA Championships with the Bulldogs in 2018 and 2019.

The native of Vancouver, British Columbia was selected by the Capitals in the first round, 28th overall, in the 2016 NHL Draft.