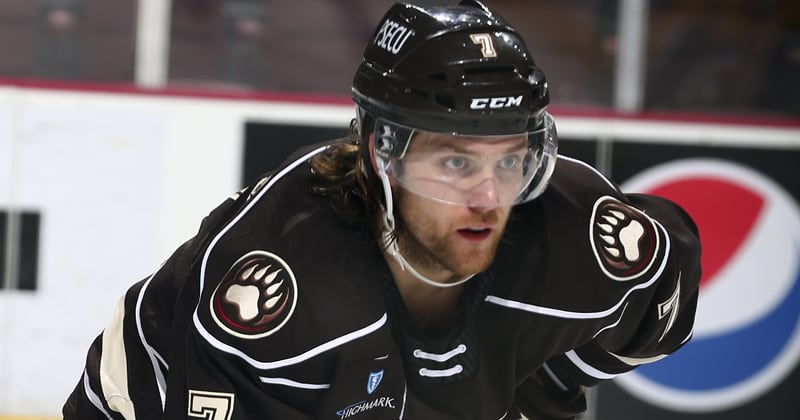 The Hershey Bears announced today that the club has re-signed defenseman Macoy Erkamps to a one-year American Hockey League contract for the 2021-22 season.

Erkamps, 26, skated in nine games with the Bears during the 2020-21 campaign, registering a +2 rating and 25 penalty minutes. The British Columbia native made his Hershey debut on Feb. 14 versus Lehigh Valley. He also appeared in 31 regular season games with Hershey's ECHL affiliate, the South Carolina Stingrays, tallying four points (2g, 2a) and 42 penalty minutes. He helped the Stingrays to the Kelly Cup Finals, registering three points (1g, 2a) in 13 playoff games.

The 6", 196-pound rearguard has played in 126 career games with Binghamton, Belleville, Wilkes-Barre/Scranton, and Hershey, posting 14 points (1g, 13a) and 138 penalty minutes. Prior to turning pro, Erkamps was the captain of the Brandon Wheat Kings of the Western Hockey League, leading the club to a championship in 2016. He led all WHL defenders with 58 assists that season, and his 71 points ranked second among league blueliners.

The Bears open the 2021-22 season on Saturday, October 16 at GIANT Center. Season Ticket Packages for the 2021-22 season are on sale now featuring discounts and great extra benefits, with options ranging from Full Season Tickets to Flex-10 Plans. Further information may be found at HersheyBears.com/tickets/season-tickets.php. A complete season schedule will be released later this summer.