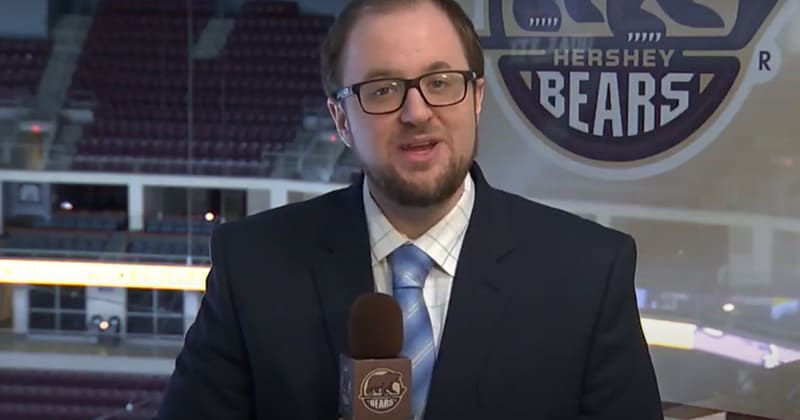 The American Hockey League has selected Zack Fisch, manager of media relations and broadcasting for the Hershey Bears, as the winner of the league’s Ken McKenzie Award for the 2020-21 season.

Recognizing the important role played by team management in building a successful franchise, the Ken McKenzie Award is presented annually to an AHL team executive who most successfully promotes his or her own club. Fisch is just the third all-time Hershey Bear to win the award, joining Doug Yingst (1987-88) and Brent Hancock (1980-81). Notable broadcasters who have won the award previously include the legendary Doc Emrick, John Forslund (NHL on NBC, Seattle Kraken), Rick Peckham (Tampa Bay Lightning) and the late-Dave Strader (NHL on ESPN and multiple NHL teams).

During a season of uncertainty due to the COVID-19 pandemic, Fisch went above and beyond his regular duties and was at the forefront of the Bears’ public relations, marketing, broadcast and social media efforts in 2020-21. He helped maintain the organization’s standard of excellence by coming up with creative solutions to continue showcasing the Bears and the AHL in a positive fashion on the local and national levels, and elevating the team’s digital media footprint to reach an all-time high in corporate social partnerships.

Fisch’s creativity and leadership helped produce memorable moments such as a video of Matt Moulson’s children announcing his selection as team captain; widespread coverage of the team’s drive-thru Teddy Bear Toss; and national interviews with video coach Emily Engel-Natzke, the first woman to hold a coaching position in the franchise’s 83-year history.

Fisch utilized his platform as the “Voice of the Bears” to increase engagement and serve as a trusted source of team information for fans during the pandemic. In addition to a partnership with the local Fox TV affiliate – spearheaded by Fisch – that saw several Bears games televised (including one on NHL Network), fans could follow the team on a five-station network of radio affiliates and on AHLTV, and watch the Bears Live pregame show on Facebook. Fisch also ensured that fans planning to attend games were kept up to date on arena protocols to ensure their health and safety at Giant Center, and his broadcasts frequently included stories of people impacted by COVID-19. Fisch’s on-air work earned him a fill-in role calling several NHL games on the Washington Capitals radio network this season.

The AHL’s Ken McKenzie Award, first presented in 1978, honors Ken McKenzie, the founder and long-time publisher of The Hockey News and a 1997 media honoree by the Hockey Hall of Fame as the Elmer Ferguson Memorial Award winner. Mr. McKenzie was also the NHL’s first publicity director and creator of its first media guide

In operation since 1936, the AHL serves as the top development league for all 31 National Hockey League teams. Nearly 90 percent of today’s NHL players are American Hockey League graduates, and more than 100 honored members of the Hockey Hall of Fame spent time in the AHL in their careers.