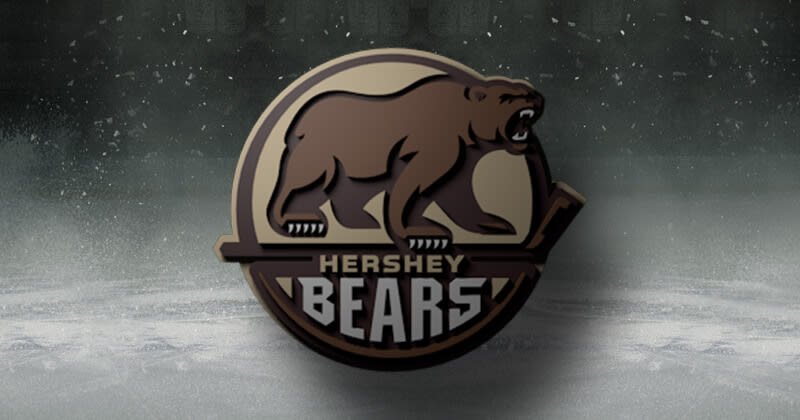 With the 2020-21 season under strict COVID-19 protocols that prevented in-game ceremonies, the Hershey Bears were unable to hold the annual Player Awards Night at the end of the season. However, we are proud to announce the club's 2021 Player Awards winners virtually.

Kenny Smith Memorial Award: #15 Connor McMichael
The award is given out annually for the Hershey Bears player who earns the most "Three Stars of the Game" nominations during the season. Rookie forward Connor McMichael led the Bears in that category, including claiming First Star honors an impressive eight times. McMichael tallied a team-best 27 points (14g, 13a), playing in all 33 games. He led the AHL with eight game-winning goals. This award is named for the former Boston Bruins and Hershey Bears great, Kenny Smith.

Arlene Tighe Award for the Bears Unsung Hero: #10 Shane Gersich
Third-year pro Shane Gersich has been called a “warrior” by head coach Spencer Carbery, and the versatile skater played all three forward positions once again this year for the Bears. A solid two-way player, Gersich collected 14 points (6g, 8a), scoring one shorthanded goal and playing a large part on the penalty kill. A pest to his opponents, Gersich racked up 39 penalty minutes and appeared in all 33 games for the Bears. The Arlene Tighe Award is chosen by the Hershey Bears Booster Club.

Dan Sernoffsky Most Improved Player Award: #23 Brett Leason
Second-year forward Brett Leason enjoyed a strong sophomore season, collecting 20 points (9g, 11a) while playing in all 33 games. The 2019 second-round selection of Washington had two game-winning goals and also played a large part on the penalty kill. In his rookie season in 2019-20, Leason had just 14 points (3g, 11a) over 50 games. This award is named after late Lebanon Daily News award-winning sports reporter, Dan Sernoffsky.

Jack Gingrich Award for Bears Rookie of the Year: #15 Connor McMichael
While the season was shortened and a year like never before, Connor McMichael had one of the best rookie seasons in club history. McMichael led the Bears in goals (14), points (27), shots (127), and tied for first in power play goals (6). He became the first Bears rookie since Craig Fisher in 1990-91 to lead the team in scoring. McMichael’s eight game-winning goals were an AHL-best, and he was named to the league’s All-Rookie Team and also earned North Division All-Star honors. This award is named after Jack Gingrich, a former Hersheypark Arena "Voice of the Bears" and an off-ice official in the AHL for almost 20 seasons before his passing in 1988. The award is chosen by the Hershey Bears off-ice officials.

John Travers/Steve Summers Award, Highest Plus/Minus: #5 Cameron Schilling
In his second tour of duty with the Bears, Cameron Schilling led the club with a +12 rating during the 2020-21 season over 31 games. He had 19 points for the Bears to lead all blue liners, and was named to the North Division All-Star Team. This award is named after the pair of longtime Hershey Bears beat reporters and to qualify this year, a player must have played in at least 20 games.

Milton Garland Memorial Award for Bears Best Defender: #32 Martin Fehervary
Second-year Bear Martin Fehervary was a standout on the backend for Hershey, finishing with 17 points (3g, 14a) over just 24 games. He was a +10 and played most of the season on Hershey’s top defensive pair. He enjoyed a large improvement in his offensive game after collecting 14 points over 56 games in his rookie campaign the year prior. This award is named after Mr. Milton Garland, who installed the ice making equipment at Hersheypark Arena.

PNC Bank Team MVP Award: #31 Pheonix Copley and #35 Zach Fucale
For the second straight year, the Hershey goaltenders share the Team MVP award. It’s no surprise after the duo also won the AHL’s Harry “Hap” Holmes Memorial Award for securing the AHL’s lowest goals-against average at 2.33. Pheonix Copley wins a share of the award for the second straight year, going 10-4-1 in his 15 appearances, registering two shutouts, a 2.66 goals-against average and an .896 save percentage – including a 6-0-1 mark (1.55, .943) on home ice. His 100th AHL victory came in his final start of the year on May 8 as he stopped 34 shots to earn a 3-0 shutout win over Lehigh Valley. Fucale made 11 appearances for the Bears and went 9-2-0 while leading the AHL with a 1.80 goals-against average and ranking second with a .932 save percentage.