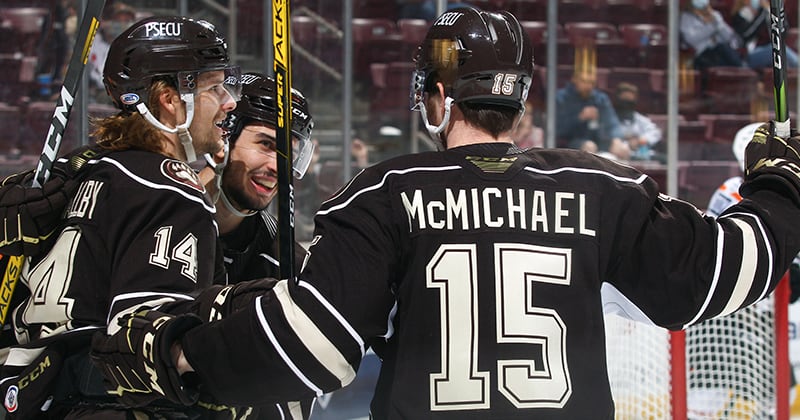 The American Hockey League announced today that Hershey Bears forward Connor McMichael has been selected as the CCM/AHL Player of the Week for the period ending May 16, 2021.

McMichael, 20, tallied two goals and four assists for six points in two games, helping Hershey secure the best record in the AHL for the 2020-21 season. On Saturday night, McMichael scored the decisive goal in the Bears’ 3-2 win over Binghamton, his league-leading eighth game-winning tally of the year. And in Sunday’s season finale, McMichael registered a goal and three assists for his first career four-point effort as Hershey defeated Wilkes-Barre/Scranton, 5-2 at GIANT Center.

McMichael finished first on Hershey in scoring, registering 27 points (14g, 13a) in 33 games during his rookie season. He is the first rookie to lead the Bears in scoring since Craig Fisher collected a team-best 79 points in 77 games during the 1990-91 campaign.

In addition to his strong season in Hershey, McMichael also made his NHL debut with the Capitals this season, appearing in one game, and captured a silver medal with Canada at the 2021 IIHF World Junior Championship.

In recognition of being named the CCM/AHL Player of the Week, McMichael will receive an etched crystal award from CCM.

McMichael is scheduled to take part in today's Hershey Bears Final Media Availability which starts at 3 p.m. Further information may be found below.