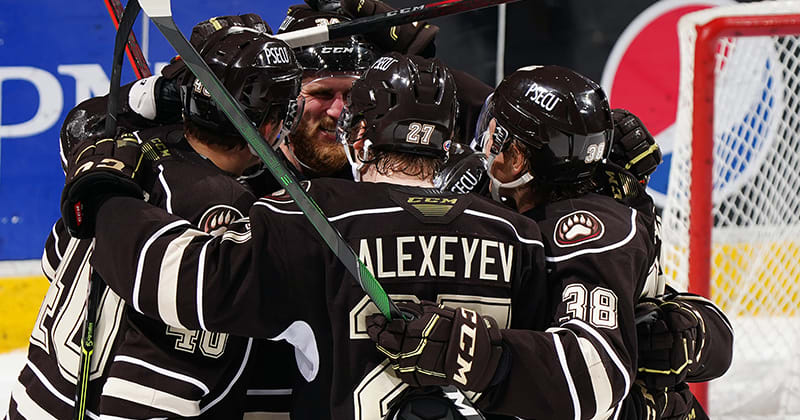 The Hershey Bears ended a memorable 2020-21 season with a victory, defeating the rival Wilkes-Barre/Scranton Penguins, 5-2, in front of 1,329 fans at GIANT Center on Sunday evening. It was the club's 10th straight win on home ice, and helped Hershey end the season with a 24-7-2-0 record, claiming the Macgregor Kilpatrick Trophy as the AHL's regular season champions, and the North Division crown in the truncated AHL season.

Both Connor McMichael (1g, 3a) and Brett Leason (2g, 1a) had big games amid a chippy affair that saw Hershey post a season-high 60 penalty minutes. Hershey bolted out a 3-0 lead in the game, getting goals in the first period from McMichael and captain Matt Moulson. McMichael opened the scoring at 7:37, deflecting a Leason backhand shot past the pad of Wilkes-Barre/Scranton goaltender Brett Brochu to make it 1-0 Hershey. The goal was McMichael's 14th of the season.

McMichael set up Moulson for his 12th goal of the year at 11:32, chipping a pass to the captain in the slot. Moulson lifted a backhander over the glove of Brochu to make it 2-0 Hershey.

McMichael added another assist only 1:03 into the second period, firing the puck to the net from the left boards. The pass was right on the tape of Leason, and the second-year pro redirected the puck into the net for his 8th marker of the season.

Wilkes-Barre/Scranton responded with two goals to cut the lead to one, scoring at 7:30 on a power play marker from Drew O'Connor, and 8:56 on a screen shot from Cam Lee to make it 3-2.

In the third period, Hershey got an insurance marker from Eddie Wittchow with 10 minutes to play. Shane Gerisch stole the puck and fed Wittchow who cut to the middle of the slot. He snapped a shot low underneath Brochu to make it 4-2. The goal was Wittchow's first of the season.

Leason ended the season with a five-on-three power play goal at 17:46 for the Bears, accepting a McMichael feed in the left circle and scoring his second goal of the game to make it 5-3 Hershey.

Hunter Shepard earned the win in goal for the Bears with 34 saves to finish the season 3-0-0-0. Local product Padraig Carey backed up Shepard in the win after signing a tryout agreement with the club earlier in the day.

McMichael finished the season as Hershey's point leader with 27, becoming the first Hershey rookie since Craig Fisher in 1990-91 to lead the team in scoring.

The Bears will return to the ice next fall with the 2021-22 AHL season set to start on October 15.