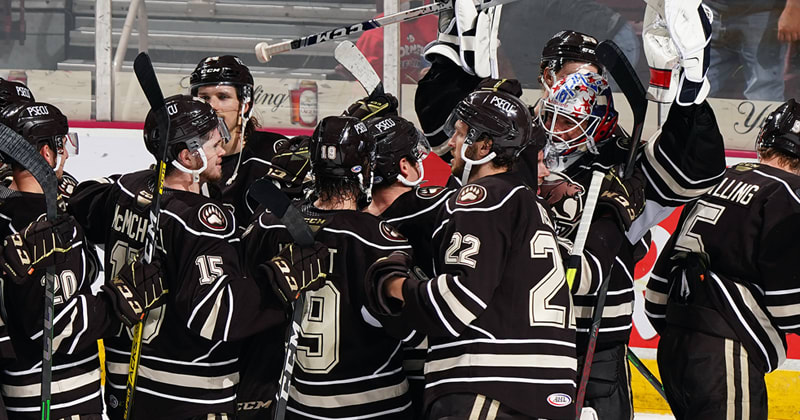 It was an afternoon filled with milestones as the Hershey Bears earned a 3-0 victory over the Lehigh Valley Phantoms on Saturday at GIANT Center. The win was Hershey's eighth straight victory on home ice, and moved Hershey's magic number to clinch the North Division  to just one. Hershey goaltender Pheonix Copley stopped all 34 shots he faced, earning his 100th American Hockey League win. The Bears are now 22-7-2-0 on the season.

Hershey opened the scoring just 3:17 into the game on Axel Jonsson-Fjallby's 10th goal of the season. The forward snapped a soft shot to the net that Lehigh Valley goaltender Zane McInytre stopped. The rebound bounced loose off the skate of Phantoms' defender Derrick Pouliot and into the net to make it 1-0 Hershey. The Bears were outshot 16-10 in the opening frame, but Copley stood tall.

In the second period, Joe Snively scored his sixth goal of the season for Hershey at 12:21, connecting on a shot from the slot. Both Philippe Maillet and Matt Moulson collected milestone helpers on the goal. For Maillet, the assist was his 100th in the AHL, while Moulson registered his 700th career professional point.

Hershey iced the win with an empty net goal at 16:40 of the third period as Maillet connected for his sixth goal of the season. Moulson picked up another assist on the insurance marker.

Copley was the game's First Star with the perfect performance, making several sensational saves, including denying talented Phantoms rookie Tyson Foerster on a clear-cut breakaway in the second period. The shutout was Copley's second of the season and the 13th of his AHL career.

The Phantoms outshot the Bears 34-27 in the loss. Both teams were 0-for-2 on the power play. Hershey finished the season series 5-4-2-0 versus Lehigh Valley.

The Bears are back in action next Saturday at GIANT Center as they host the Binghamton Devils at 1 p.m.