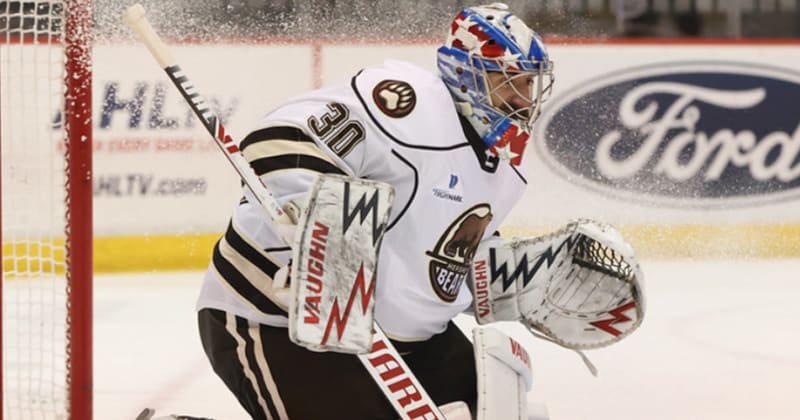 Hunter Shepard turned aside 31 shots, and Connor McMichael scored his league-leading seventh game-winning goal of the season to help the Hershey Bears to a 2-1 victory over the Binghamton Devils on Friday night at the RWJBarnabas Health Hockey House. The win moved the Bears to 10-1-0-0 versus the Devils this season, and improved Hershey to a 21-7-2-0 record on the season.

After the two teams played a scoreless first period, the Bears struck for a pair of goals in the middle frame to take a 2-0 lead. Moulson scored his 11th goal of the season at 13:48 to break the ice and make it 1-0 Hershey. After Joe Snively was denied in tight by Binhamton goaltender Gilles Senn, Moulson tapped the rebound home to give the Bears the lead. Snivley and Eddie Wittchow assisted.

On the power play at 17:30 the second period, McMichael one upped Moulson with his 12th goal of the season. The 20-year-old got a pass in the right circle and snapped a shot that deflected off Senn's stick and ricocheted into the net to make it 2-0. Alex Alexeyev and Philippe Maillet assisted on the goal.

The Devils finally solved Shepard at 13:50 of the third period. Reilly Walsh's shot from the right point beat a screened Shepard to make it 2-1. The goal was Walsh's fifth of the season, and it snapped Shepard's bid for a second straight shutout to start his AHL career.

The Bears held on to earn the victory despite being outshot 32-25. Hershey's penalty kill enjoyed a strong night, going 5-for-5, while the club was 1-for-2 on the power play.

Hershey's record on the road finishes up at 10-6-0-0. Hershey has three games remaining on the season, all on home ice, and the club's magic number to clinch the North Division is now five.

The Bears are back in action tomorrow afternoon versus the Lehigh Valley Phantoms at GIANT Center at 4 p.m. Tickets are available via Ticketmaster. The game will be televisted on FOX43.