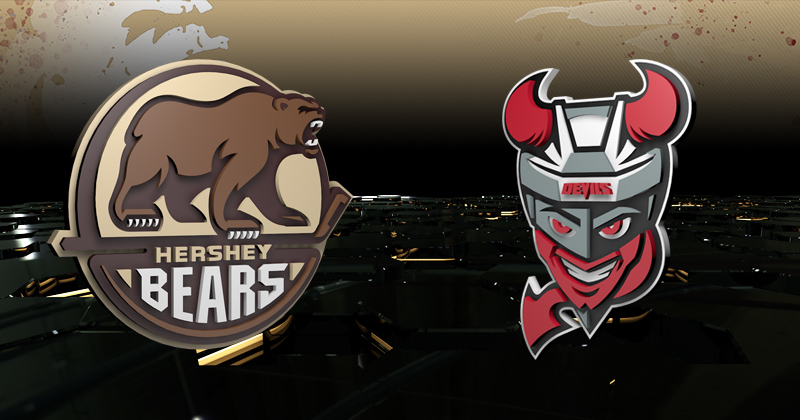 The Hershey Bears continue the 2020-21 season, presented by Penn State Health, this evening on the road versus the Binghamton Devils. The puck drops at 7 p.m. at the RWJ Barnabas Health Hockey House in Newark, New Jersey. The Bears are 9-1-0-0 versus the Devils this season.

LAST TIME OUT:
The Bears enter tonight's game coming off a 5-3 loss on Wednesday at Lehigh Valley. The Chocolate and White scored just 24 seconds into the game as Philippe Maillet connected for his fifth goal of the season, but in a back-and-forth affair, the team's played to a 2-2 tie through 20 minutes, and 3-3 deadlock through 40 minutes. In the third period, the Phantoms pulled away with a goal from Cameron York on the power play, as well as a tally from captain Cal O'Reilly, who added a late insurance marker. Tyson Foerster had three points (1g, 2a) for Lehigh Valley while Maillet, Damien Riat, and Axel Jonsson-Fjallby scored in the losing effort for Hershey. The Bears outshot the Phantoms 37-19 in the loss. The Devils skated on Wednesday versus Wilkes-Barre/Scranton, falling by a 6-3 score. Tyce Thompson, the son of former Hershey Bears captain Brent Thompson, scored his first AHL goal and added a helper in the loss. Wilkes-Barre/Scranton captain Josh Currie and winger Anthony Angello led the way for the Baby Pens with three points each.

KEMPNY JOINS BEARS:
The Washington Capitals announced Thursday the defenseman Michal Kempny has joined the Hershey Bears on a LTI conditioning loan. Kempny, 30, has not played this season due to an injury suffered while training. The native of Hodonin, Czech Republic has played 232 career NHL games with the Capitals and Chicago Blackhawks, registering 61 points (14g, 47a), a +58 rating, and 130 penalty minutes. He was a member of Washington's 2018 Stanley Cup Championship team, playing in 24 postseason contests that year, registering five points (2g, 3a). If Kempny dresses for tonight's game, it would mark his AHL debut.

RIAT RAMPS UP:
Rookie forward Damien Riat scored a goal in Wednesday's loss at Lehigh Valley, striking for his third marker of the season. For Riat, it was his first goal since Mar. 14, snapping a 16-game drought. The goal in Wednesday's contest also marked the first power play goal in Riat's AHL career. The Swiss forward's first AHL goal came versus Binghamton at the RWJ Barnabas Health Hockey House on Feb. 17. His tally that game was the winning marker. Riat has nine points (3g, 6a) in 29 games this season with the Chocolate and White.

SHEP SHUTOUT SEASON:
Goaltender Hunter Shepard had a perfect debut for the Bears last Sunday, stopping 28 shots to earn his first AHL victory, and his first AHL shutout in a 2-0 win over Lehigh Valley. He is the first Hershey goaltender to earn a win in his AHL debut since Adam Carlson collected a 4-2 win at Grand Rapids on Oct. 21, 2017. Shepard was a two-time National Champion at Minnesota-Duluth where he was coached by former Bear Scott Sandelin. He finished his NCAA career with a 76-37-5 record in 119 games, ranking first all-time in UMD history in wins, goals-against average (1.94), save percentage (.922), and shutouts (17).

FANTASTIC FEHERVARY:
Hershey defender Martin Fehervary enters this evening's contest with assists in five straight games for the Chocolate and White. That is the longest assist streak of any Bear this season. Over his past five games, Fehervary has notched six points (1g, 5a) in that stretch. His 17 points (3g, 14a) this season rank him 10th in the American Hockey League in scoring among defenders. He has twice scored the game-winning goal versus the Devils this season. The Slovakian defender has seven points (2g, 5a) in 8 games versus Binghamton this year.