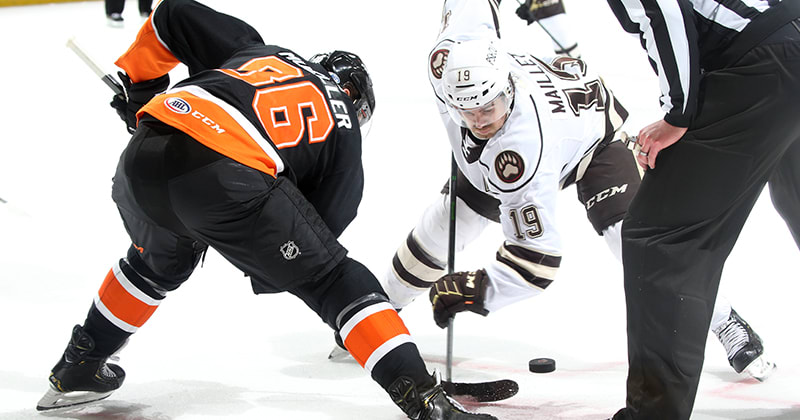 Phantoms Break Through in Third to Beat Bears, 5-3

Rookie forward Tyson Foerster had a goal and two assists to help the Lehigh Valley Phantoms to a 5-3 win over the Hershey Bears on Wednesday evening at the PPL Center. The loss snapped Hershey's three-game win streak and dropped the Bears to 20-7-2-0 on the season.

Hershey opened the scoring in Wednesday's game just 24 seconds into the contest. Philippe Maillet connected on a spin-around wrister from the low slot to give Hershey a 1-0 lead on the game's first shot. The goal was Maillet's fifth marker of the season and Matt Moulson and Brett Leason collected helpers.

Lehigh Valley would respond with a pair of goals to grab a 2-1 lead. Off a failed clear, Linus Hogberg scored for the Phantoms at 4:23, picking off a pass at the blue line and beating Hershey goaltender Pheonix Copley with a wrist shot over the glove to make it 1-1. At 7:07, the Phantoms grabbed a 2-1 lead as Chris Mueller parked at the netfront and tapped a Sandin feed past Copley to give the Phantoms the lead.

Hershey would answer on the power play at 16:33 of the period with Damien Riat connecting for his first goal since Mar. 14. Brett Leason accepted a pass on the right wing, and the second-year pro sent a dot-to-dot feed to Riat in the left circle, and the winger's one-timer beat Lehigh Valley goalie Felix Sandstrom to tie the game, 2-2. The goal was Riat's third of the season.

The two clubs traded goals in the middle frame with Foerster scoring his 10th goal of the season at 2:02, deflecting a Cameron York shot on the power play past Copley's blocker. Cal O'Reilly also assisted on the goal.

Later in the frame, Hershey equalized on Axel Jonsson-Fjallby's ninth goal of the season at 17:54. Fresh off the bench, Jonsson-Fjallby completed a give-and-go with rookie Connor McMichael and streaked in on a breakaway. His first shot was denied by Sandstrom, but he flipped the rebound past the outstretched netminder to make it 3-3.

Lehigh Valley pulled away in the third period thanks to two slick assists from Foerster. The rookie sprung York on a breakaway, and the fellow rookie struck on the power play at 8:00 for the eventual game-winning goal. Foerster helped pad Lehigh Valley's lead, dishing a back-door feed to O'Reilly at 14:10 to make it 5-3 Phantoms.

Hershey outshot Lehigh Valley 37-19 in the loss. The Bears were 1-for-4 on the power play while the Phantoms were 2-for-3.

Hershey plays its final road game of the season on Friday in Newark as they visit the Binghamton Devils at 7 p.m. The game may be heard on the Bears Radio Network or viewed on AHLTV.