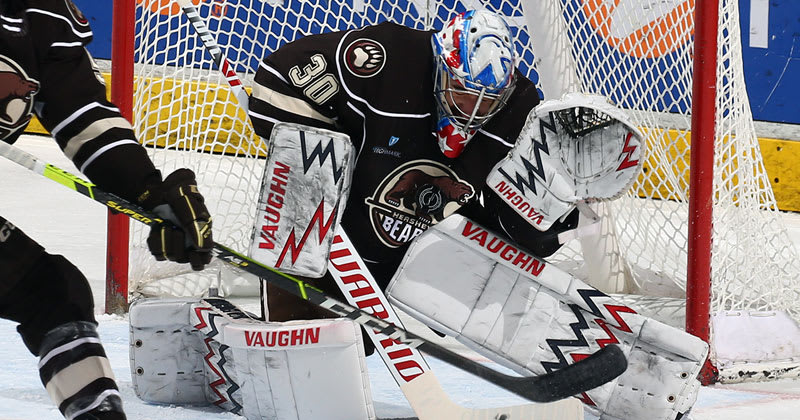 In his American Hockey League debut, goaltender Hunter Shepard posted a 28-save clean sheet to lead the Hershey Bears to a 2-0 win on Sunday evening at GIANT Center. The Bears improved to 20-6-2-0 on the season, and the win was the 100th victory for Hershey head coach Spencer Carbery. He is the 12th coach in franchise history to accomplish this feat.

Sunday's game was a goaltender's duel and Lehigh Valley's Felix Sandstrom kept Hershey scoreless in the first period as the Bears outshot the Phantoms 17-3. Sandstrom would finish the evening with 40 saves for Lehigh Valley.

The only puck that beat Sandstrom came off the tape of Hershey's Brett Leason in the second period. At 9:58, Shane Gersich won a faceoff back to Leason. The forward collected the puck in the slot, and snapped a shot past Sandstrom's blocker to make it 1-0 Hershey. The goal was Leason's seventh of the season.

Shepard stopped 13 shots in the second period, including a breakaway from veteran Chris Mueller, then denied 12 more Lehigh Valley opportunities in the final period to capture the shutout. The two-time NCAA Champion at Minnesota-Duluth was named the game's First Star.

With Sandstrom pulled for the extra attacker, Axel Jonsson-Fjallby sealed the win for the Bears with an empty net goal with 1:50 remaining, tallying his eighth goal of the season.  Gersich and Cameron Schilling assisted on the goal, and for Schilling, the helper was his 200th AHL point.

Hershey went 0-for-4 on the power play in the game while the Phantoms were 0-for-6.

The two teams rematch on Wednesday at the PPL Center in Allentown at 7:05 p.m. The game may be heard on the Highmark Bears Radio Network and viewed on AHLTV.