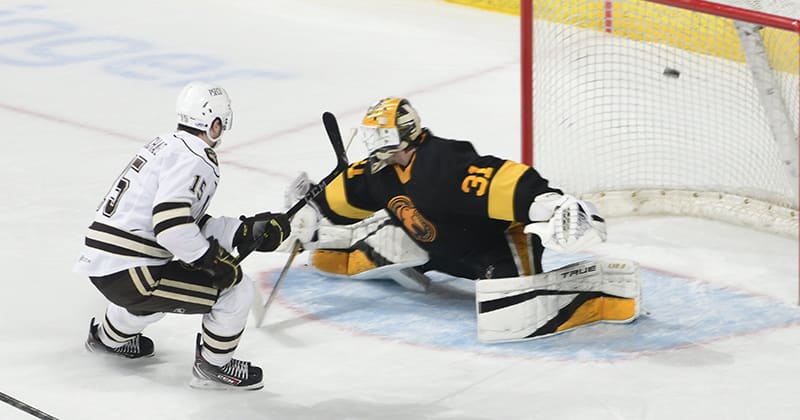 Connor McMichael scored the overtime winning goal, and Kale Kessy added a goal and an assist to lead the Hershey Bears to a 4-3 victory on Saturday night at the Mohegan Sun Arena at Casey Plaza. The goal was McMichael's league-leading sixth game-winning goal of the year, and the victory improved the Bears to 19-6-2-0 on the season.

Wilkes-Barre/Scranton bolted out to a 1-0 lead only 1:56 into the game. Sam Miletic scored his second goal of the season for Penguins, cashing in on a fortunate deflection off the lively end boards behind the net of Pheonix Copley. Billy Sweezy and Jordy Bellerive assisted on the goal.

Hershey responded to tie the game at 3:15 on the fourth goal of the season for veteran defender Cameron Schilling. Teammate Philippe Maillet worked the puck back to the center point with Schilling joining the play, and the defender snapped a shot that beat Wilkes-Barre/Scranton goaltender Max Lagace to make it 1-1. The goal was Schilling's 200th professional point, and Maillet and Reece Willcox assisted on the tally.

The teams traded goals in the second period as well. Felix Robert scored his fifth goal of the season for the Penguins at 4:31, striking from the backdoor on a perfect cross-rink feed from Miletic.

Hershey once again responded as Alex Alexeyev scored his second goal of the season at 7:26. Hershey's Riley Sutter fed Kessy on the left wing, and the winger snapped a shot that Lagace sprawled across and stopped. The rebound was battled back to Alexeyev in the left circle. With Lagace out of position on the seat of his pants, Alexeyev scored into the open left side of the net to make it 2-2.

The back-and-forth affair continued into the third period, and Wilkes-Barre/Scranton took the lead on a goal from Will Reilly at 4:04. The defender jumped up into the play and snapped a shot past Copley's blocker to make it 3-2 for the home team.

At 6:08, Hershey responded as Kessy scored his second goal of the season, connecting on a breakaway. Sutter found Kessy behind the defense, and the winger chipped a shot over Lagace's blocker to make it 3-3. With a goal and an assist, Kessy collected his first multi-point game since Nov. 8, 2015.

The game progressed to overtime and McMichael played the hero once again. Alexeyev sprung McMichael down the right wing and the rookie streaked in on a breakaway. He cut to the net and lifted a shot over Lagace's blocker to give Hershey its third overtime win of the year. The goal was McMichael's team-leading 11th of the season, and it was his second overtime goal of the campaign.

The Bears are back in action tomorrow at GIANT Center as they host Lehigh Valley at 3 p.m. Tickets are on sale now via Ticketmaster. The game will be televised locally on FOX43 and nationally on the NHL Network.