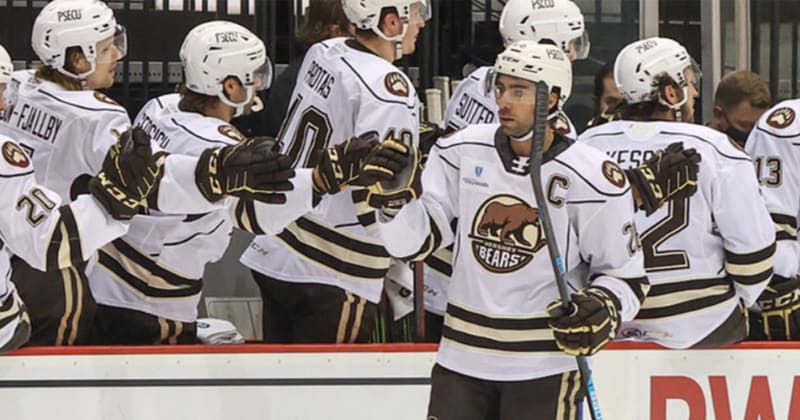 Matt Moulson notched a pair of goals, and Axel Jonsson-Fjallby secured the win via shootout as the Hershey Bears beat the Binghamton Devils 4-3 on Wednesday at the RWJ Barnabas Health Hockey House. With the win, Hershey improved to 18-6-2-0 on the season, and 9-1-0-0 versus the Devils this year.

The Devils tallied the game's opening goal with just 1:01 left in the first period. Top prospect Alexander Holtz scored his first AHL goal on the power play from the left circle, blasting a slap shot past Hershey netminder Zach Fucale's glove to make it 1-0 Binghamton. Graeme Clarke and Tyce Thompson assisted on the marker.

Hershey got back-to-back goals from Moulson in the second period to take the lead. The Hershey captain tied the game at 5:16 of the middle frame, striking from the right side of the net for his 9th goal of the season. Philippe Maillet centered a pass from the left corner, and with Binghamton goalie Jeremy Brodeur out of position, Moulson connected to make it 1-1.

At 10:55, Moulson scored on the power play to give Hershey the 2-1 lead. Rookie Connor McMichael fired a pass to the net that Moulson deflected up and past Brodeur to put Hershey ahead. The goal tied Moulson with McMichael for the team lead with 10 tallies.

Binghamton struck on the power play to tie the game 2-2 before the intermission. Mason Jobst scored his first goal as a Devil at 17:22, beating Fucale on a wrist shot from the slot. Fabian Zetterlund provided the primary assist while Kevin Bahl also added a helper.

Success on the power play continued in the third period with the Bears pulling ahead, 3-2, on a Maillet power play goal at 1:54 of the frame. Only six seconds into a power play, Maillet tallied his fourth goal of the season off a faceoff win, with assists coming from Alex Alexeyev and Moulson.

Jobst would score again for Binghamton, tying the game 3-3 with a wrist shot at 10:38 to force overtime.

The extra session yielded no scoring, and the game progressed to Hershey's first shootout of the year. Fucale stopped all two shots he faced, while Maillet scored for Hershey, and Jonsson-Fjallby tallied the winning marker, roofing a shot over the glove of Brodeur to give Hershey the extra point.

The Bears return to the ice on Saturday at Wilkes-Barre/Scranton. The puck drops at 5 p.m. and the game may be heard on the Bears Radio Network and viewed on AHLTV.