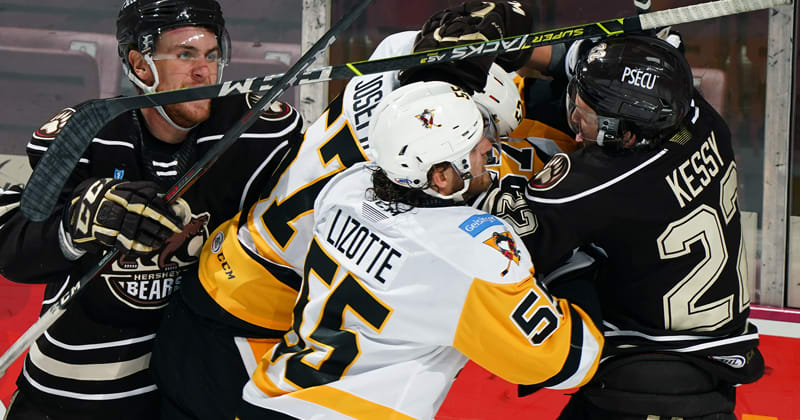 Weekly Release #12: North Division Title on the Line in May

The Hershey Bears are in a battle for the top spot in the American Hockey League’s North Division heading into the final month of the regular season. The Chocolate and White are 8-2-0-0 over the past 10 games, and sit in second place in the division with a 17-6-2-0 record and a .720 points percentage. The Bears close April on Wednesday at Binghamton, before playing on back-to-back days this weekend. Hershey visits Wilkes-Barre/Scranton on Saturday then hosts Lehigh Valley on Sunday afternoon at GIANT Center.


The Chocolate and White won two of the three games they played last week, starting things off last Wednesday with a 6-1 win at Lehigh Valley. Rookie forward Connor McMichael had two power play goals for Hershey, and the Chocolate and White went 3-for-7 on the man advantage. The win was just Hershey’s third versus Lehigh Valley this season in nine head-to-head games.

Last Saturday, Hershey upended Wilkes-Barre/Scranton 3-1 at GIANT Center. The game was scoreless through two periods, before Axel Jonsson-Fjallby opened the scoring for the Bears early in the third period. Zach Fucale was strong in net for Hershey, stopping 31 shots, and defender Alex Alexeyev tallied the winning marker with just 3:30 to play to give Hershey a sixth straight win on home ice, and a sixth straight win overall.

Hershey’s win streak was snapped the next evening at Wilkes-Barre/Scranton as the Bears fell to the Baby Pens in the rematch, 6-3. Philippe Maillet had a power play goal, Matt Moulson tallied, and Axel Jonsson-Fjallby had a shorthanded marker, but Wilkes-Barre/Scranton earned the win thanks to two goals and an assist from captain Josh Currie. Hershey posted a season-high 44 penalty minutes in the loss, with 24 coming from Kale Kessy.

FUELED BY THE FLOW: Hershey forward Axel Jonsson-Fjallby enters this week with goals in three straight games, a mark tied for the longest goal scoring streak by any Bear this season. He tallied his second shorthanded goal of the year in Sunday’s loss at Wilkes-Barre/Scranton, making him the first Bear to post multiple shorthanded goals this season. The native of Stockholm, Sweden played in his 100th career AHL game last Wednesday and has registered 12 points (7g, 5a) in 25 games this season.

SCHILLING SUCCESS: In last Wednesday’s win at Lehigh Valley, defender Cameron Schilling collected three helpers. It was the first time in Schilling’s 567-game AHL career that he posted either three assists or three points in a game. The veteran defender is one career point from 200 in his professional career (198 AHL, 1 NHL).

SHUTTING THE DOOR: Netminder Zach Fucale made a late-game penalty shot save on Wilkes-Barre/Scranton's Jonathan Gruden to help Hershey snag the victory last Saturday. The last time a Bears netminder allowed a penalty shot goal was on Nov. 11, 2016 when Albany's Joe Blandisi scored on Vitek Vanecek. Since then, Bears goaltenders are 11-for-11 on penalty shots with stops coming from Vanecek (5), Copley (2), Samsonov (2), Fucale (1), and Joe Cannata (1).

CALL HIM THE CLOSER: Trusted to help protect a lead late in games, Hershey’s Brian Pinho has scored five empty net goals this season. That mark is the most in the American Hockey League. Pinho’s five empty net goals are the most by a Bear since Chris Bourque scored on the vacated goal six times during the 2015-16 season. Pinho has registered 12 points (8g, 4a) in just 10 games with the Bears this season, and his shooting percentage of 34.8% (8-for-23) ranks fourth in the AHL. He has goals in five straight games at GIANT Center.

BEARS BITES:  Connor McMichael’s five game-winning goals are tied for the league lead. McMichael also ranks fifth in the league in shots (95)…Zach Fucale’s 1.66 goals-against average continues to lead the AHL…The Bears are averaging 14.76 penalty minutes per game, the third most in the AHL…Forward Kale Kessy leads the league in penalty minutes with 77…On Monday, the club recalled defenseman Macoy Erkamps from South Carolina (ECHL).