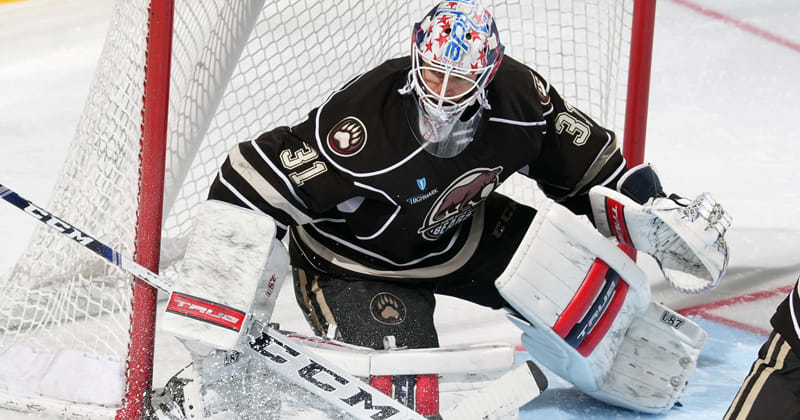 Aliaksei Protas notched his first American Hockey League goal,and Pheonix Copley stopped all 21 shots he faced to lead the Hershey Bears to a 2-0 shutout victory over the Wilkes-Barre/Scranton Penguins on Sunday afternoon at GIANT Center. A season-high 1,445 fans watched the Bears earn the victory to improve to 14-5-2-0 on the season.

In just his fourth AHL game, Protas scored what stood as the game-winning marker at 12:14 of the opening period. Linemates Brett Leason and Joe Snively battled for a loose puck, and Snively poked it free between two Wilkes-Barre/Scranton defenders. Protas collected the loose puck in the slot and slipped a shot past the blocker of Penguins goalie Max Lagace to make it 1-0 Hershey. Leason's assist on the goal gave him helpers in three straight games.

Between the pipes, Copley earned his fourth straight win, and his first shutout of the season with 21 saves. He made several strong saves to preserve the victory to improve to 6-2-1 on the season. The perfect performance was his 12th shutout of his AHL career, and his first since Feb. 7, 2020 versus Wilkes-Barre/Scranton.

The game did come with a bit of controversy as Wilkes-Barre/Scranton appeared to tie the game on the power play with 12:30 left in the third period on a Jordy Bellerive shot, but the officials converged and determined there was no goal scored, and the game stayed 1-0.

Brian Pinho sealed the win for Hershey with an empty-net power play goal at 19:48 to move Hershey to 5-1-0-0 versus the Penguins this season.

Shots finished up 22-21 in favor of the Bears. Hershey went 1-for-5 on the power play while the Penguins were 0-for-4. Hershey posted a season-high 33 penalty minutes, including 27 from Kale Kessy after he engaged in a spirited fight with Wilkes-Barre/Scranton's Kyle Olson in the second period.

Hershey is back in action on Wednesday at GIANT Center versus Lehigh Valley at 7 p.m. Tickets are available via Ticketmaster.