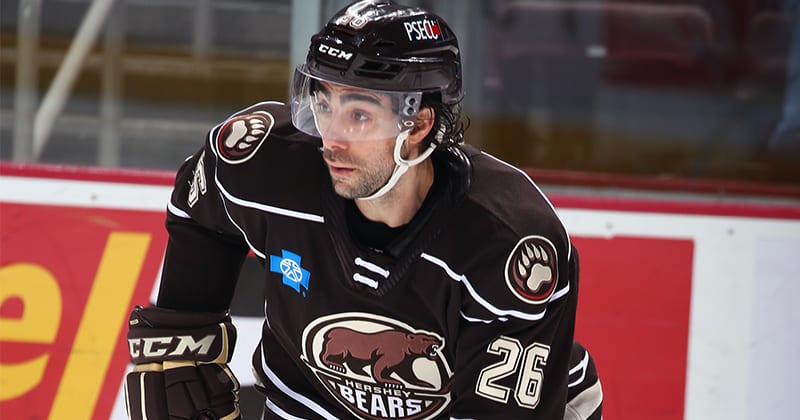 The Hershey Bears earned a 3-2 victory over the Binghamton Devils at the RWJBarnabas Health Hockey House on Wednesday evening in Newark, New Jersey. Hershey fired 50 shots on Devils goaltender Jeremy Brodeur, and with the win, Hershey improved to 13-5-2-0 on the season. The win also marked the 300th professional victory for Hershey head coach Spencer Carbery. He's now won 93 games as head coach of the Bears after claiming 207 wins in his tenure as head coach of the ECHL's South Carolina Stingrays.

The Bears opened the scoring on the power play at 11:42 as Matt Moulson connected for his 7th goal of the season. Hershey's captain banked the puck off Devils defenseman Matt Tennyson and into the net for his 4th power play goal of the year to make it 1-0 Hershey.

The Devils answered on the power play as Travis St. Denis tied the score, 1-1 at 16:02. On a broken play, St. Denis cashed in at the back post after a point shot was partially blocked. The goal was St. Denis' 2nd of the season.

Shane Gersich gave the Bears the lead back with just 1:52 left in the opening period, scoring his 4th goal of the year on a 2-on-1 rush. Gersich raced down the left wing and called his own number, snapping a shot over the glove of Brodeur to make it 2-1 Hershey. Riley Sutter and Martin Fehervary picked up the helpers on the goal.

In the middle frame, the Bears outshot the Devils 17-7 and scored the lone goal of the frame. With only 1:16 left in the period, Joe Snively scored on a rebound, walking around Brodeur and tucking a shot past the right pad of the goaltender to make it 3-1 Hershey. Brett Leason and Aliaksei Protas assisted, giving Protas his first AHL point.

In the third period, Binghamton's Brett Seney scored his 3rd marker of the season to get the Devils within one with just 8:20 remaining in the game. The forward walked down the middle of the ice and stashed a bouncing puck past Hershey goaltender Zach Fucale to make it 3-2. However, that was as close as the Devils would come as Hershey held on for the win.

Fucale collected the victory in net with 21 saves, while Brodeur stopped 47 shots in his first AHL start. Hershey went 1-for-9 on the power play while Binghamton was 1-for-4. Hershey is now 7-1-0-0 this season versus the Devils.

The Bears return to action on Saturday at Lehigh Valley at 7:05 p.m.