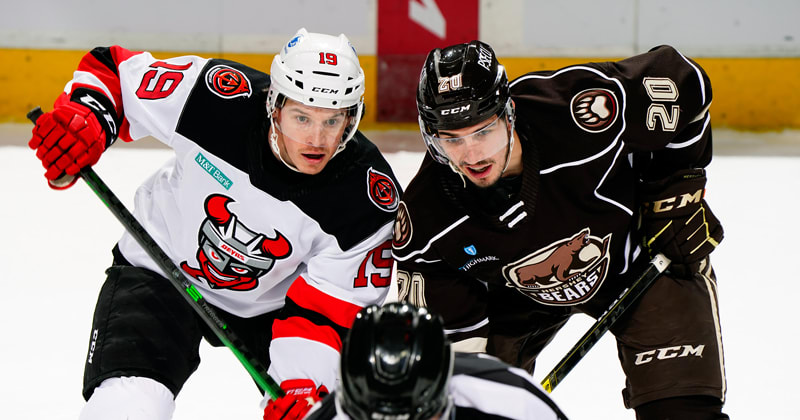 Weekly Release #9: Action Dials Up in April for Bears

The Hershey Bears have won five of their past six games and continue to sit near the top of the North Division standings with a solid 12-5-2-0 record through 19 games this season. As the club is now in the second half of the season, the action will ramp up for the Chocolate and White starting this week. With the exception of the final week of the regular season, the Bears will play three games each week going forward, starting with a visit to Newark to faceoff with the Devils this Wednesday, a game at Lehigh Valley on Saturday, and the final game of the week on Sunday at home versus Wilkes-Barre/Scranton.

Last week, Hershey played a pair of games, losing on the road on Mar. 31 at Lehigh Valley and starting April with a win at home over Binghamton last Saturday afternoon at GIANT Center.

In last Wednesday’s game, Hershey dropped a 4-1 decision to the Phantoms at the PPL Center. Lehigh Valley scored three goals in the first period, and Hershey’s lone tally in the loss was a third period power play goal from second-year pro Kody Clark. Lehigh Valley rookie Tyson Foerster factored in on all four goals for the Phantoms, registering two goals and two assists. Hershey was outshot 29-28 in the loss, and the Bears are now 2-5-0-0 versus the Phantoms so far this season.

Hershey got back into the win column last Saturday, upending the Binghamton Devils 4-2 at GIANT Center. Hershey’s Connor McMichael had a pair of goals, including the opening marker 1:33 into the game, and the game-winning goal at 16:46 of the third period. Forward Axel Jonsson-Fjallby had three assists, and defender Cameron Schilling and forward Brian Pinho also had three goals for the Bears. The win moved Hershey to an impressive 6-1-0-0 versus the Binghamton Devils this season.

AXEL’S APPLES: Hershey winger Axel Jonsson-Fjallby enjoyed the best game of his professional career last Saturday versus Binghamton, capturing a career-high in both assists (3) and points (3). He also helped Hershey to a perfect 5-for-5 afternoon on the penalty kill in the win. For Jonsson-Fjallby, it was his first multi-assist game since Feb. 16, 2020, a game in which he had two helpers versus Lehigh Valley.

CONNOR CLUTCH AGAIN: Rookie forward Connor McMichael once again had the game-winning goal in last Saturday’s contest versus Binghamton, striking in the closing minutes of the game to give Hershey a one-goal lead. For McMichael, it was his fourth game-winning tally this season, a mark that is tied for the league lead. With a pair of goals in Saturday’s game, it was also McMichael’s third multi-goal game this year. He now leads the Chocolate and White with eight goals on the season, and is also tied for first in goals among all AHL rookies.

DAMIEN’S DISHING IT: Rookie winger Damien Riat had posted assists in three games for the Bears, notching a single helper in each of his past three contests. Riat has collected seven points (2g, 5a) in 19 games this season. The 24-year-old was selected in the 4th round of the 2016 NHL Draft by Washington.

COPS THE PUCK STOPPER: Hershey goaltender Pheonix Copley stopped a season-high 29 shots in Saturday’s victory over Binghamton to improve to 5-2-1 on the season. Copley has won three straight appearances, posting a 1.67 goals-against average in that span, while stopping 82-of-87 shots, good for a .943 save percentage. Copley is now five wins from 100 in his AHL career, and his 65 wins with Hershey is tied for 11th all-time in franchise history with Ed Chadwick.

WELCOME TO THE VIPER: Highly-regarded Washington Capitals prospect Aleksei Protas made his Hershey debut last week. The 2019 3rd round selection stands at 6’6” and is coming off an 18-point campaign in the KHL with Dinamo Minsk in his rookie professional season. Protas was teammates with Hershey’s Brett Leason for the 2019 Western Hockey League Champion Prince Albert Raiders.

BEARS BITES: Hershey’s schedule for the remainder of April sees them play every Wednesday, Saturday, and Sunday for the rest of this month…Head coach Spencer Carbery’s next win will be the 300th in his professional career. He had 207 wins with South Carolina (ECHL) and has 92 victories as coach of Hershey since taking over as head coach in 2018.