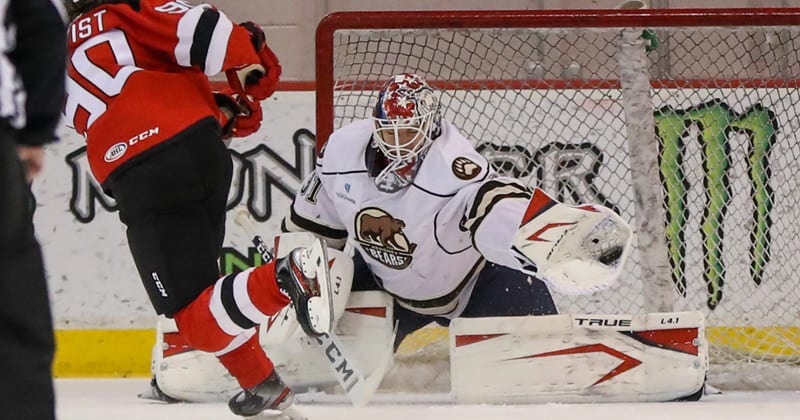 A four-goal outburst in the second period led the Hershey Bears to a 6-3 victory over the Binghamton Devils on Friday night at the RWJBarnabas Health Hockey House. Kody Clark and Brett Leason each scored twice in the victory that improved the Bears to 4-1-2-0.

Hershey's Garrett Pilon opened the scoring with a highlight-reel goal at 13:43. Off a turnover, Hershey's Mike Sgarbossa saw Pilon alone at the net and quickly fed him the puck. In tight on goaltender Gilles Senn, Pilon put the puck between his legs and roofed a shot shortside on Senn to put Hershey ahead 1-0. The goal was Pilon's first of the season.

It was the Devils who struck first in the second period with Nolan Foote jamming a puck over Hershey netminder Ilya Samsonov from the crease to make it 1-1 at 1:31. After the marker, it was Hershey responding with their best period of the season.

The Bears scored four times in the middle frame on 14 shots. Leason gave Hershey the lead at 4:05, powering his way to the net down the right wing and beating Senn with a shot to the top corner. Under two minutes later, Clark tallied his first of two goals, capitalizing on a rebound after Matt Moulson hit the post.

Axel Jonsson-Fjallby got in on the scoring for Hershey, finishing on a breakaway at 9:18. Connor McMichael sent Jonsson-Fjallby in free and clear with a perfect up-ice pass, and the Hershey winger's quick wrist shot beat Senn over the glove to make it 4-1 Bears.

Before the frame ended, Clark added his second goal of the game, deflecting a Rob O'Gara shot past Senn off a faceoff win from Mason Morelli, who picked up his first point as a Bear.

The Devils made the game tight in the third period, striking for a pair of goals to cut Hershey's lead down to just two. Nick Merkley was credited with an early goal, just after a power play expired, tapping a puck past Samsonov at the post to make it 5-2 at 1:04. Marian Studenic made it 5-3, finishing a behind-the-back pass from Jesper Boqvist at 6:50.

Samsonov and the Bears stood tall, and Leason added an empty-net goal at 18:40 to give Hershey's second win in as many tries in Newark. Samsonov made 25 saves to earn the win, including stopping 14 shots in the opening frame. His strong first period also included a penalty shot save on Boqvist.

The two teams rematch tomorrow at GIANT Center. The puck drops at 4 p.m. and the game may be heard on the Bears Radio Network and viewed on AHLTV.