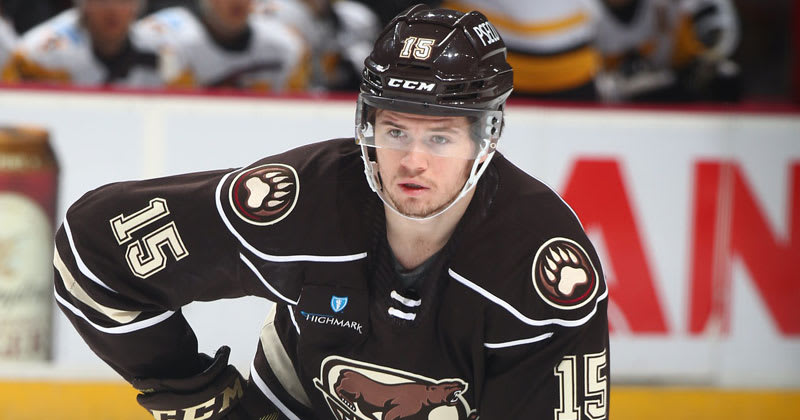 Connor McMichael tallied his first professional hat trick, and netminder Zach Fucale made 34 saves in his Hershey debut to lead the Bears to a 3-1 win over the Wilkes-Barre/Scranton Penguins on Saturday afternoon at GIANT Center. Hershey now has points in the first five games of the season and improved to 3-0-2-0 with the win.

Wilkes-Barre/Scranton struck first on Saturday. With Hershey's Blake Pietila in the penalty box for a double-minor for high sticking, the Penguins scored at 6:27. Jon Lizotte's shot from the blue line was deflected by Wilkes-Barre/Scranton's Zach Nastasiuk, beating Fucale over the blocker to make it 1-0 for the visitors.

However, McMichael would take the game over for Hershey just a few minutes later. The rookie forward responded with a tying goal on the power play at 8:39. Hershey's Garrett Pilon fired a shot from the point that was tipped on net by teammate Matt Moulson. After a save from Penguins goalie Max Lagace, McMichael found the rebound to make it 1-1.

In the second period, McMichael scored unassisted at 1:19 on a play that started in his own zone. At the blue line, he poked a puck past Wilkes-Barre/Scranton defender Will Reilly and raced in on a breakaway. McMichael's shot beat Lagace over the catching glove to make it 2-1 Hershey.

McMichael completed the hat-trick and sealed the win for Hershey at 18:50 of the third period. With the Bears clinging to a one-goal lead, Wilkes-Barre/Scranton pulled Lagace for an extra-attacker. With the net empty, McMichael intercepted a cross-rink pass and scored into the open goal from his own zone. The hat-trick was the first by a Bear, and the first by a Hershey rookie, since Joe Snively scored three times versus Charlotte on Feb. 25, 2020 at GIANT Center.

Fucale was strong between the pipes in his Hershey debut, earning his first AHL win since Jan. 24, 2019 versus Cleveland as a member of the Chicago Wolves. He stopped 13 shots from Wilkes-Barre/Scranton in the middle frame, and nine more in the third period to keep the Penguins off the scoreboard.

Hershey was out shot for the first time this season, with the Penguins having the edge, 35-30. Wilkes-Barre/Scranton was 1-for-6 on the power play while the Bears were 1-for-4.

Hershey returns to action at Wilkes-Barre/Scranton on Wednesday. The puck drops at 5 p.m from the Mohegan Sun Arena and the game may be heard on the Bears Radio Network and viewed on AHLTV.