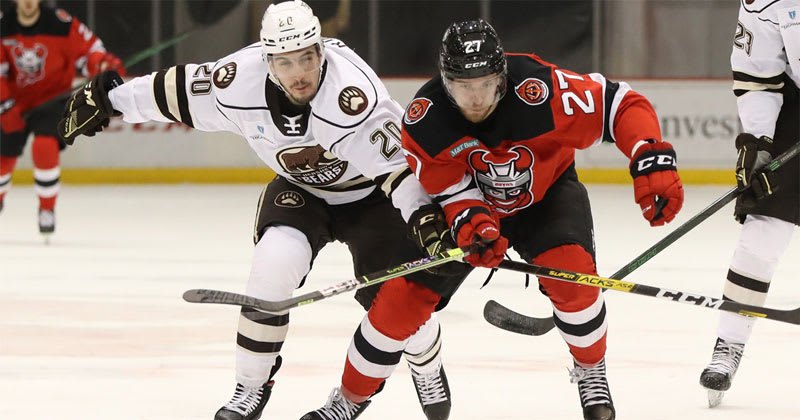 Damien Riat's first American Hockey League goal was the game-winner as the Hershey Bears defeated the Binghamton Devils, 2-1, on Wednesday evening at the RWJ Barnabas Health Hockey House in Newark, New Jersey. The win improved Hershey to 2-0-2-0, and netminder Ilya Samsonov made 22 saves to earn the victory between the pipes.

For the first time this season, the Bears surrendered the game's opening goal. Reilly Walsh drew first blood for the Devils, scoring on the power play to make it 1-0 Binghamton. Late in the man-advantage, Walsh went coast-to-coast, splitting the Bears defense and beating Samsonov with a high shot to give the Devils the lead. Binghamton took the lead into the dressing room despite being out shot by Hershey, 13-5.

The Bears broke through only 1:41 into the second period on a goal from Brett Leason. Hershey's Martin Fehervary gained entry into the offensive zone and threaded a perfect pass to Leason on the right wing. The second-year forward snapped a shot that bounced off the post and past Binghamton netminder Gilles Senn to make it 1-1. Leason finished the game with a team-high seven shots on goal.

Hershey out shot Binghamton 15-5 in the middle frame, but Senn kept the game even until the third period. Riat pulled the Bears out of the 1-1 stalemate with his first professional goal in North America. On a give-and-go with Shane Gersich, Riat streaked in down the right wing and took a low shot that beat Senn under the pad to give the Bears the 2-1 lead.

Samsonov kept Binghamton at bay, stopping all 13 shots he faced in the final period to secure the win for Hershey. The Bears held the shots advantage in the game, 43-23. Hershey now has points in all four games they have played this season.

The Bears are back in action on Saturday on home ice as they host the Wilkes-Barre/Scranton Penguin at 1 p.m. at GIANT Center