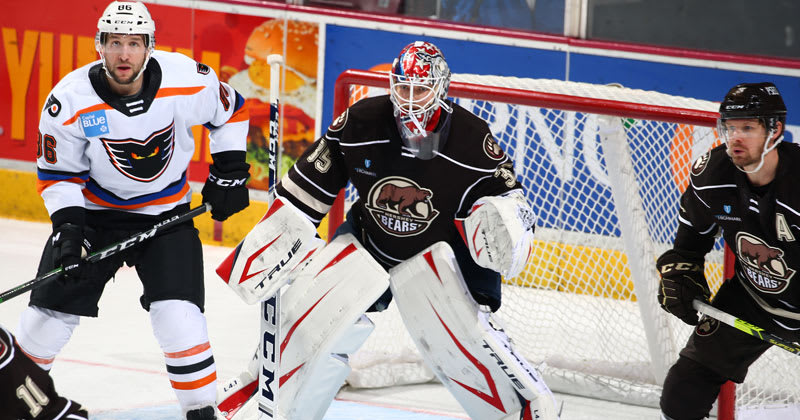 Weekly Release #2: Bears Look for Pair of Wins This Week

The Hershey Bears have collected points in all three contests so far this season, registering a 1-0-2-0 record through the first two weeks of the AHL’s season. Hershey won its first game of the season last Thursday at Wilkes-Barre/Scranton, and heads into another two-game week. The Chocolate and White visit Binghamton (in Newark, New Jersey) on Wednesday and host the Baby Pens on Saturday at GIANT Center at 1 p.m.

Last Thursday, the Chocolate and White scored a 3-2 victory over I-81 rival Wilkes-Barre/Scranton at Mohegan Sun Arena. Hershey captain Matt Moulson scored only 1:22 into the game to give the Bears the lead, but Tim Schaller tied the game for the Baby Pens before the end of the opening period. The club’s traded power play goals in the second period with Josh Currie striking for Wilkes-Barre/Scranton at 2:10, and Mike Sgarbossa responding for Hershey at 5:14. The Bears broke the 2-2 tie on Connor McMichael’s power play goal at 8:56 of the final stanza. Hershey went 2-for-7 on the power play and goaltender Pheonix Copley earned the win between the pipes with 20 saves. The Chocolate and White out shot the Baby Pens, 36-22.

On Sunday, Hershey hosted Lehigh Valley, and for the second straight weekend, it was the Phantoms who earned an overtime win at GIANT Center, topping the Bears, 5-4. In a back-and-forth affair, Lehigh Valley opened up a 3-1 lead early in the second period, but the Bears battled back to tie the game on goals from Cameron Schilling and Mike Sgarbossa. Defender Rob O’Gara scored his first goal with the Bears at 5:52 of the third period to pull Hershey into a 4-3 lead. However, Lehigh Valley’s Zayde Wisdom struck for his second goal of the game, beating Hershey netminder Ilya Samsonov over the glove on a partial break to make it 4-4 at 14:44. In overtime, the Phantoms David Kase rang the post on a slapshot, but Wisdom collected the rebound and fed Kase who didn’t miss on his second try, securing the 5-4 win for the visitors. Both teams failed to convert on the power play with Hershey going 0-for-2 and Lehigh Valley 0-for-3. Shots favored the Bears, 36-29, in the contest.

SGARBOSSA SUCCESS: Veteran forward Mike Sgarbossa opened the season in the NHL with the Washington Capitals, posting two assists in five games. With the Capitals returning to full health, Sgarbossa returned to the Bears last week and the former 30-goal scorer had instant success for Hershey. He tallied a power play goal and added an assist in his AHL season debut at Wilkes-Barre/Scranton last Thursday. He followed up that performance with a game-tying goal in Sunday’s 5-4 overtime loss to Lehigh Valley. The alternate captain has been a catalyst for Hershey’s offense, as he has scored 108 points (45g, 63a) in 116 career games with the Bears.

CLUTCH CONNOR: Top prospect Connor McMichael scored his first professional goal last Thursday at Wilkes-Barre/Scranton. The marker stood up as the winner, making McMichael the first Bear since Brett Leason to have his first pro goal be a game-winner. McMichael was the Capitals 1st round selection, 25th overall, in the 2019 NHL Draft.

SCHILLING’S STRONG RETURN: After missing the opening two games of the season due to an injury, defender Cameron Schilling returned to the Bears in an impactful way last weekend. Schilling had a goal and an assist in his season debut on Sunday versus Lehigh Valley. Schilling started his pro career with the Bears, skating with the club from 2012-15, and Sunday's game was his first with the Chocolate and White since the 2015 Calder Cup Playoffs vs. Hartford.

SAMMY TIME: Goaltender Ilya Samsonov was re-assigned to the Chocolate and White by the Washington Capitals last Sunday. After playing two games with the Capitals in January, Samsonov landed on the NHL’s COVID protocol list, missing nearly a month. His appearance with Hershey on Sunday was his first game since Jan. 17 versus Pittsburgh, and his first game with the Bears since the second round of the 2019 Calder Cup Playoffs. Samsonov stopped 24 shots, including many point-blank opportunities in the overtime loss to the Phantoms.

BEARS BITES: Forward Blake Pietila, signed early last week, is set to face his former team on Wednesday. Pietila, a Devils draft pick, scored 20 goals with Binghamton in 2018-19. If he plays Wednesday, it would be his Hershey debut...Ilya Samsonov earned a 16-save shutout in his only career appearance vs. Binghamton on Jan. 16, 2019…Lucas Johansen had two assists in Sunday’s game, giving him his first multi-assist game since Nov. 11, 2018 vs. Syracuse…Forward Garrett Pilon has three assists over his past two games.