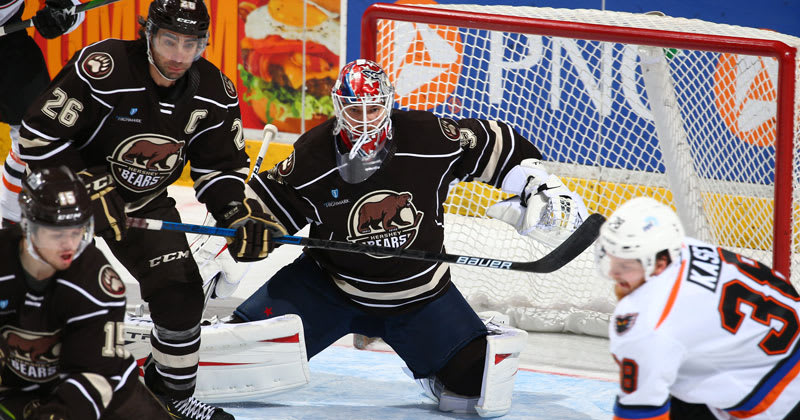 In a wild back-and-forth affair, the Lehigh Valley Phantoms earned a 5-4 overtime win over the Hershey Bears on Sunday afternoon at GIANT Center. It was the Phantoms' second overtime win in as many tries versus Hershey this season, and the loss dropped the Bears to 1-0-2-0 on the campaign. Hershey goaltender Ilya Samsonov, re-assigned by Washington earlier in the day after missing over a month on the NHL's COVID protocol list, made 24 saves and stopped numerous grade-A opportunities in the losing effort.

Hershey's 406 fans in attendance loved the way the Bears started the Valentine's Day contest with a goal just 16 seconds into the game. Joe Snively accepted a Garrett Pilon feed and darted down the left wing, snapping a shot that beat Lehigh Valley netminder Zane McIntyre off the post to make it 1-0 Hershey. The Bears have posted the game's opening marker in all three games they have played this season.

The Bears struggled the remainder of the opening period, being out shot 14-10 in the frame, and allowing a pair of goals from the visitors. Lehigh Valley's Logan Day made it 1-1 on a shot that deflected over the shoulder of Samsonov, and in the closing minute of the period, Zayde Wisdom scored his first professional goal to give the Phantoms the 2-1 advantage at 19:35.

After Lehigh Valley's Matt Strome opened up a 3-1 lead for the Phantoms on a backdoor tap-in just 2:42 into the the second period, Hershey recovered and notched a pair of goals back-to-back to tie the game, 3-3. Cameron Schilling scored in his return to Chocolatetown, striking at 13:03 from the right wing off a Snively feed. Just over three minutes later, Schilling and fellow defender Martin Fehervary would help set up the tying goal, as Mike Sgarbossa struck for his second marker of the season from the slot at 16:32 to make it 3-3.

The Bears had the lead in the final period courtesy of a Rob O'Gara goal at 5:52, as the blue liner's backhander from the near-boards rang off the post and past McIntrye, giving the defender his first goal as a Bear, and putting Hershey ahead, 4-3.

The Phantoms had the answer as Wisdom scored his second goal of the game unassisted at 14:44, stealing the puck from O'Gara and streaking in on a breakaway, beating Samsonov over the glove to force overtime.

In the extra session, David Kase rang the post behind Samsonov off a slapshot, and with the netminder and Hershey defenders scrambling to recover, Wisdom passed the rebound to Kase who bounced his second try off Samsonov and in to give the Phantoms the win.

Hershey out shot Lehigh Valley 36-29 in the contest. Both teams failed to convert on the power play with the Phantoms going 0-for-3 and the Bears 0-for-2.

The Bears are back in action on Wednesday evening at Binghamton (in Newark, New Jersey) at 7 p.m. The game may be heard on the Bears Radio Network and viewed on AHLTV.