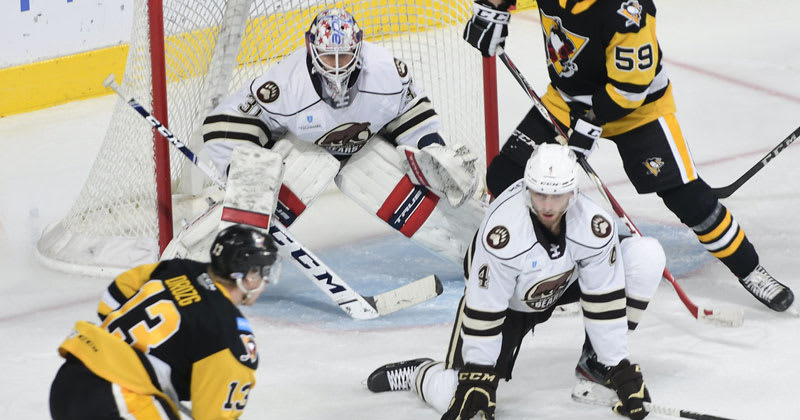 Top prospect Connor McMichael scored his first professional goal to lead the Hershey Bears to a 3-2 win over the Wilkes-Barre/Scranton Penguins on Thursday evening at Mohegan Sun Arena. The win was the first of the season for Hershey and improved the Chocolate and White to 1-0-1-0.
Only 1:22 into the game, Hershey captain Matt Moulson scored his first goal of the season off a miscue from Wilkes-Barre/Scranton netminder Emil Larmi. On a dump in, Larmi failed to corral the puck behind the net, and while returning to the goal, fell down, allowing Moulson a free shot at the net from the left wing. Kody Clark and Axel Jonsson-Fjallby assisted on the marker.
Wilkes-Barre/Scranton got the tying goal from veteran Tim Schaller at 16:24 of the opening frame, tying the game 1-1.
The two teams traded power play goals in the middle frame, with Wilkes-Barre/Scranton grabbing a 2-1 lead at 2:10. With Hershey netminder Pheonix Copley screened, Wilkes-Barre/Scranton captain Josh Currie snapped a shot from the slot that bounced off the post and past Copley.
Only 3:04 later, Mike Sgarbossa tied the game for Hershey. The veteran received a Garrett Pilon pass on the left wing. He skated in and beat Larmi with a wrist shot over the blocker to make it 2-2.
McMichael's goal was the lone tally of the final frame, capping off a 2-for-7 night on the power play for the Bears. McMichael, Washington's 1st Round draft selection in 2019, struck on a rebound, sliding a second-chance opportunity under Larmi to make it 3-2 Hershey. Pilon and Sgarbossa assisted for their second points of the game.
Copley earned the win in goal for the Bears, stopping 20 shots. Hershey held the Penguins to 1-for-6 on the power play and played over half of the game with just four defensemen due to injuries.
The Bears are back in action on Sunday at 1 p.m. versus the Lehigh Valley Phantoms at GIANT Center. The game may be heard on the Bears Radio Network and viewed on AHLTV.