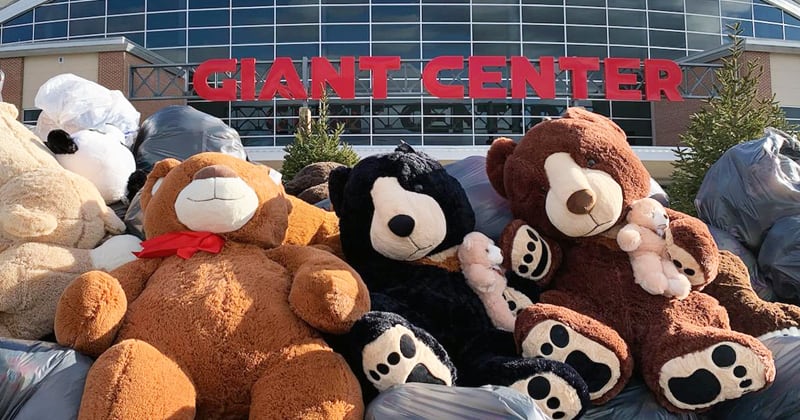 Things may have looked different this year, but Hershey Bears fans once again lived up to the reputation of being the most generous fans in all of hockey. The Bears, the oldest and most decorated team in the American Hockey League, hosted the GIANT Drive-Thru Teddy Bear Toss and Food Drive on Saturday, with the club collecting a total of 31,381 stuffed animals distributed to eight local charities.

The Bears are the world record holders for the Teddy Bear Toss, an event that traditionally takes place each December, and sees fans throw stuffed animals on the ice after the club's first goal of the game. In 2019, Bears' fans set a world record by throwing 45,650 plush items onto the ice after the team scored its first goal of the game. That record earned global attention and surpassed the previous season's record of 34,798 bears collected. This year’s count of 31,381 is the third highest total in team history.

The team also partnered with GIANT Food Stores to collect non-perishable food items. A GIANT truck full of food was donated to the Central PA Food Bank during a time when an increased number of community members are experiencing food insecurities.

The Sweigart Family Foundation continues to support the Teddy Bear Toss, and this year the organization will donate $25,000 to the Children’s Miracle Network Hershey on behalf of the event.

This event is part of the team's ongoing Hershey Bears Cares initiative showcasing the philanthropic activities and volunteer efforts of our players and staff members throughout the community. For more than 83 years, the Hershey Bears have been active in the community and value giving back to Hershey and surrounding areas. Local organizations and the children they serve that benefited from the Teddy Bear toss included: Life Center Ministries, Elstonville Motorcycle Club, behalf of Manheim VFW, Palmyra Lions Club, Dauphin County, Children & Youth, Cocoa Packs, Marysville Fire Department, Autism Society of Greater Harrisburg Area, and Riley's Toys Foundation.