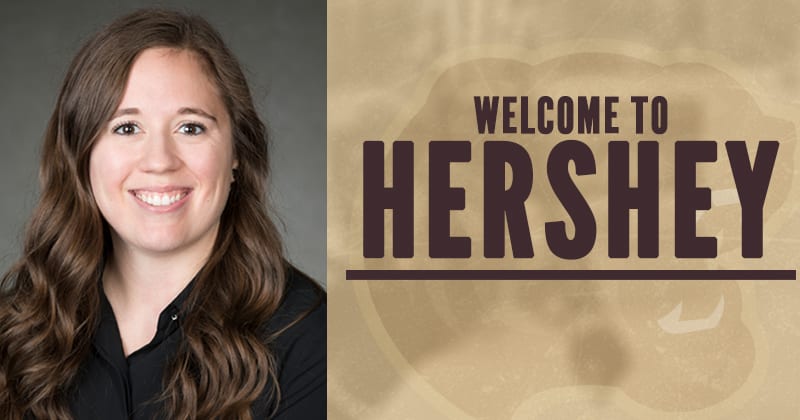 The Hershey Bears announced today that the club has hired Emily Engel-Natzke as video coach. The announcement was made by Hershey vice president of hockey operations Bryan Helmer.

Engel-Natzke, 29, joins the Bears from the University of Wisconsin where she served as the assistant director of operations/video coordinator. With the Badgers, she worked with both the men’s and women’s hockey teams from 2015-17, and exclusively with the men’s team from 2017-20. The native of Fort Collins, Colorado assisted the coaching staff by producing game-by-game video breakdowns and opponent pre-scouts, while also creating video content for players, recruits, and alumni. As a member of the women's coaching staff, she helped the Badgers to regular season and WCHA tournament titles in 2015-16 and 2016-17.

“We’re excited to welcome Emily as our new video coach,” said Helmer. “She impressed in the interview process, and we feel the passion and detail in her work, along with her skill set and experience, will make her the perfect person to join our talented coaching staff and add to our rich history and tradition.”

Engel-Natzke also started working with USA Hockey in 2013, and served as the video coach for USA Hockey’s U18 and Senior Women’s National Teams. She was part of the World Championship winning staff for the U18 team in 2018 in Russia, and the 2019 Senior Women’s team in Finland. The graduate of the University of Colorado-Boulder also worked at USA Hockey camps and festivals.

“Emily possesses the necessary experience, skill set and work ethic and will be a tremendous addition to the Hershey Bears and the Capitals organization,” said Capitals director of player personnel Chris Patrick. “We feel that she will complement the Bears coaching staff to continue to create a winning culture and help develop our prospects in Hershey.”

With Hershey, Engel-Natzke replaces Jared Elenberger who has been named Washington’s video coordinator. Elenberger spent the 2019-20 season with Hershey after previously serving as an intern with the Washington coaching staff during the club’s Stanley Cup winning 2017-18 season.