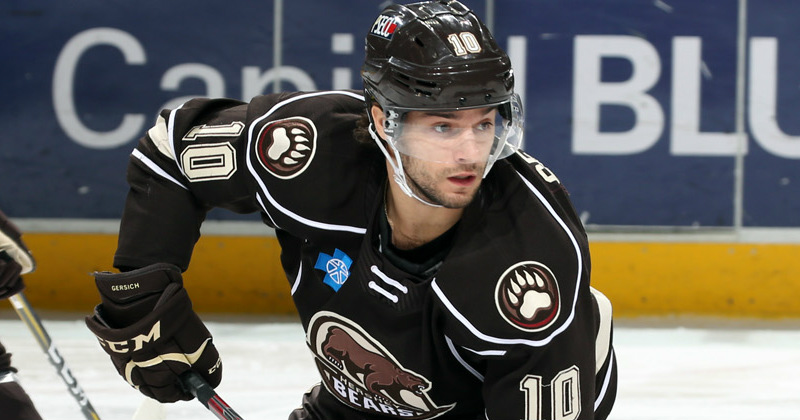 The Washington Capitals, the NHL affiliate of the Hershey Bears, have re-signed forward Shane Gersich to a one-year, two-way contract ($700,000/$150,000). The announcement was made by Washington senior vice president and general manager Brian MacLellan.

Gersich, 24, scored 18 points (10 goals, eight assists) last season for the Chocolate and White. The Chaska, Minn., native recorded his first career AHL hat trick on Jan. 31 at Bridgeport. His 10 goals were a career-best, and he also potted a pair of game-winning markers.

As a rookie with Hershey in 2018-19, Gersich recorded 24 points (eight goals, 16 assists) in 66 games. He added another three points (one goal, two assists) in nine playoff games with the Bears. In 120 career games with Hershey, Gersich has recorded 42 points (18 goals, 24 assists).

Gersich was selected by the Capitals in the fifth round, 134th overall, in the 2014 NHL Entry Draft.The forward made his NHL debut on Mar. 28, 2018, against the New York Rangers and appeared in three games in the 2017-18 season, recording an assist. Gersich also played in two playoff games, both in the Eastern Conference semifinal against the Pittsburgh Penguins, en route to the Capitals’ 2018 Stanley Cup.

Gersich played at the University of North Dakota for three seasons prior to turning professional.He helped UND to a National Championship in 2016, scoring the opening goal in the title game. He finished his NCAA career with 77 points (43 goals, 34 assists) in 117 games for the Fighting Hawks.