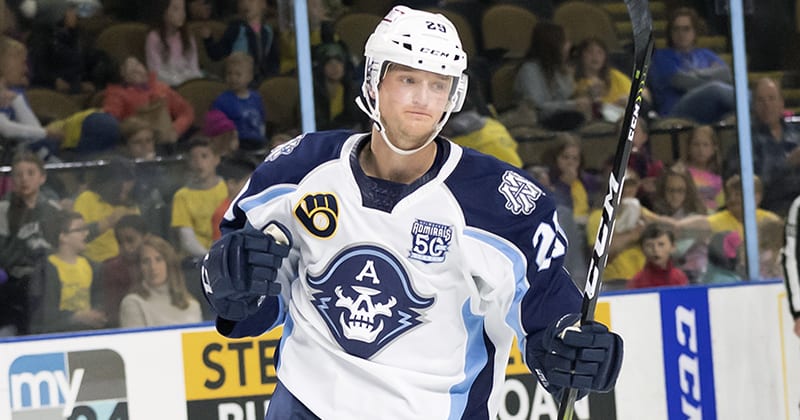 The Washington Capitals, the NHL affiliate of the Hershey Bears, announced today that the club has signed forward Daniel Carr to a one-year, two-way contract. The announcement was made by Washington senior vice president and general manager Brian MacLellan.

Carr, 28, is currently playing for HC Lugano of the Swiss Hockey League and will remain with the team until the commencement of the Capitals’ 2020-21 training camp. With HC Lugano, he has scored three points (two goals, one assist) in four games. During the 2019-20 season, Carr led the AHL's Milwaukee Admirals in goals (23) and points (50) in his 47 games with the club. He also led the Admirals in shootout goals (three) and tied for the team lead in game-winning goals (six). Additionally, he skated in 11 games with the NHL's Nashville Predators, scoring one goal.

As a member of the Chicago Wolves in 2018-19, the 6-foot, 191-pound winger was the winner of the AHL's Les Cunningham Award, given to the league's most valuable player. That season, despite only playing 52 games, Carr finished third in the league in scoring with 71 points (30 goals, 41 assists). He was selected to the 2018 AHL All-Star Classic, and his 1.37 points per game was the best in the AHL among skaters who played 30 games. As an alternate captain, he led Chicago in power play goals with 12, and helped guide the Wolves to the Calder Cup Finals, scoring 12 points (five goals, seven assists) in 15 playoff games. He was named to the AHL First All-Star Team.

The native of Sherwood Park, Alberta has also appeared in 111 NHL games with Montreal, Vegas, and Nashville, striking for 36 points (16 goals, 20 assists).

Prior to turning pro, Carr enjoyed a standout career at Union College, leading the Dutchmen to a NCAA title in 2014, earning Second All-American Team honors. He had 157 points (78 goals, 79 assists) in 160 career NCAA games.