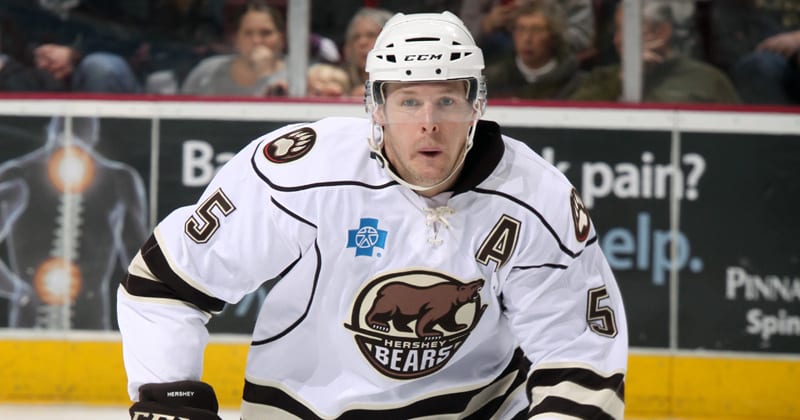 The Washington Capitals, the NHL affiliate of the Hershey Bears, announced today that the club has signed defenseman Cameron Schilling to a one-year, two-way contract ($700,000/$365,000). The announcement was made by Washington senior vice president and general manager Brian MacLellan.

Schilling, 32, played in 54 games in the 2019-20 season with the AHL's Manitoba Moose, leading the club's defensemen in goals (five), while ranking second among Moose defenders in assists (19) and points (24). He skated in his 500th AHL game on Nov. 3 versus Grand Rapids, scoring twice. He served as an alternate captain for the Moose, and his plus/minus of +7 was second on the team.

The Carmel, Indiana native is no stranger to the Washington organization. He signed an entry-level contract with the Capitals as an undrafted free agent out of Miami University (Ohio) in 2012, and was part of the organization through the 2014-15 season. He made his NHL debut on Mar. 12, 2013 versus Carolina. Schilling has appeared in six NHL games with the Capitals, and a total of 10 NHL games total between Washington and Winnipeg.

The 6-foot-2, 199-pound defenseman skated in 210 AHL games with Hershey from 2012-15, tallying 50 points (13 goals, 37 assists), a plus/minus rating of +30, and 227 penalty minutes. During part of his tenure in Hershey he served as an alternate captain. He played 19 playoff games with the Chocolate and White, registering 11 points (five goals, six assists).

Schilling has skated in 544 career AHL games with Hershey, Ontario, Rockford, and Manitoba, compiling 183 points (43 goals, 140 assists), a plus/minus of +72, and 395 penalty minutes. The best season of his professional career came with Manitoba in 2017-18 when he registered 32 points, earning him a spot in the 2018 AHL All-Star Classic.