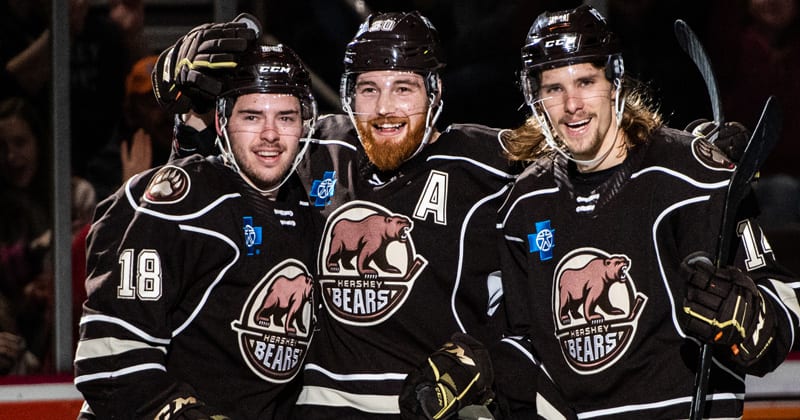 It’s a busy week in the hockey world that will help shape the Hershey Bears for the upcoming season and years to come. While we still await information about the 2020-21 campaign, this week will bring plenty of excitement, and new names to learn for Washington Capitals and Hershey Bears fans.

Here is a breakdown of key dates this week and what to watch for:

Tuesday, October 6
The NHL Entry Draft begins with the first round. This year’s draft will be held virtually, and the first round will air on NBC Sports Network starting at 7 p.m. The New York Rangers won the NHL Draft lottery are expected to take QMJHL winger Alexis Lafreniere with the #1 pick.

The Capitals will select #24 overall in the first round, a selection Bears fans will be watching closely. Recent first round selections who made an impact in Hershey before moving up to Washington include Jakub Vrana (2014) and Ilya Samsonov (2015), while both Lucas Johansen (2016) and Alex Alexeyev (2018) played in Hershey last season.

Washington assistant general manager Ross Mahoney does a great job with the draft, and has always said the Caps will take the best player available. However, there are many talented offensive players available around #24, and many mock drafts have the Capitals taking a forward. NBC Sports Washington also gave us some names to watch who could be selected by Washington tonight.

The Capitals full draft guide is a great resource for everything you need to know heading into the NHL Draft.

Wednesday, October 7
The NHL Entry Draft continues with Rounds 2-7, starting at 11:30 a.m. on NHL Network. The Capitals do not have a pick in the 2nd or 7th Round, but hold selections #80, #117, #148, and #179. While selections on day two of the draft usually don’t immediately turn pro, these are names Bears fans will want to know in the coming years.

Friday, October 9
Teams will have until 11:59 a.m. to re-sign any potential UFA’s before their contracts expire ahead of Free Agency. Most notably, Capitals star goaltender Braden Holtby is set to hit the open market on Friday unless re-signed. For the Bears, fan-favorite Liam O’Brien could become a UFA on Friday, as well as defensemen Tyler Lewington and Colby Williams.

Our PLAYER TRACKER is still available here to tell you the contract status of your favorite Hershey Bears.

Free Agency opens at Noon. The biggest names slated to head to the market this year include Stanley Cup champion defender Alex Pietrangelo, as well as former #1 overall pick Taylor Hall. A full list of UFA’s may be found HERE via CapFriendly.

The Capitals goaltending situation will also be something Bears fans will be watching closely to see if a goalie from Hershey is promoted, or if Washington adds a veteran goalie via Free Agency. Bob McKenzie of TSN has mentioned a rumor that the Capitals are the front-runners for veteran goalie Henrik Lundqvist. The 38-year-old star was bought out by the Rangers.

NHL teams will be signing players to contracts to not only help their club, but also their AHL affiliates. The Bears had a great season in 2019-20 and have a large number of players set to return, but it will be interesting to see how Washington fills some holes on defense for Hershey, particularly on the right side.

High-end talent up front will be coveted by NHL teams for their AHL affiliates, and there are a large number of skilled forwards available who are point producers. Notable names scheduled to be available include 2018 Calder Cup Playoff MVP Andrew Poturalski, 2019-20 AHL scoring champ Sam Anas, veteran scorer Chris Terry, and many others.