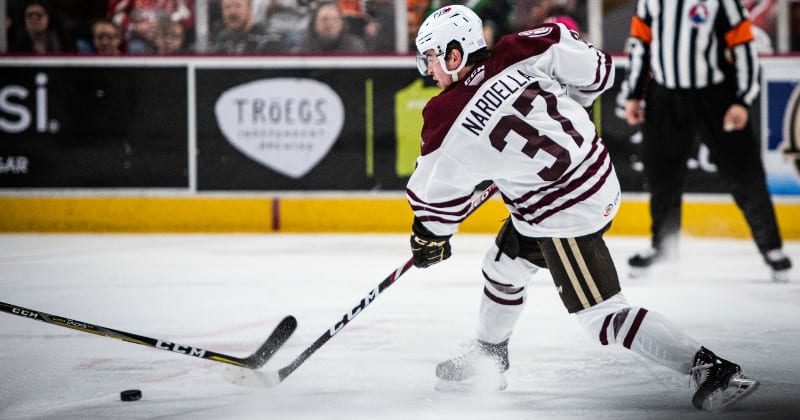 The Washington Capitals, the NHL affiliate of the Hershey Bears, announced today that the club has loaned defenseman Bobby Nardella to Djurgardens IF of the Swedish Hockey League (SHL) for the 2020-21 season. The announcement was made by Washington senior vice president and general manager Brian MacLellan.

Nardella, 24, led Hershey defenders with 31 points (4 goals, 27 assists) in 41 games last season. His point total was the most by a Bears rookie defender since current Capitals star John Carlson posted 39 points in 48 games with the Bears in 2009-10. Nardella tied for first on the team in assists and power play assists (13), and the 5-foot-9, 180-pound defenseman’s .76 points per game tied for fifth among AHL defensemen with at least 30 games played. For his efforts, Nardella won Hershey's Jack Gingrich Award for Bears Rookie of the Year.

The Rosemont, Ill., native recorded 34 points (8 goals, 26 assists) in 38 games in the 2018-19 season with the University of Notre Dame, setting a personal collegiate career-high in points and a team-high in points and assists. Nardella was named as a Hobey Baker Award nominee and to the NCAA (B1G) First All-Star Team. In 147 career games with Notre Dame, Nardella recorded 103 points (24 goals, 79 assists).

The Capitals signed Nardella as a free agent on April 5, 2019.