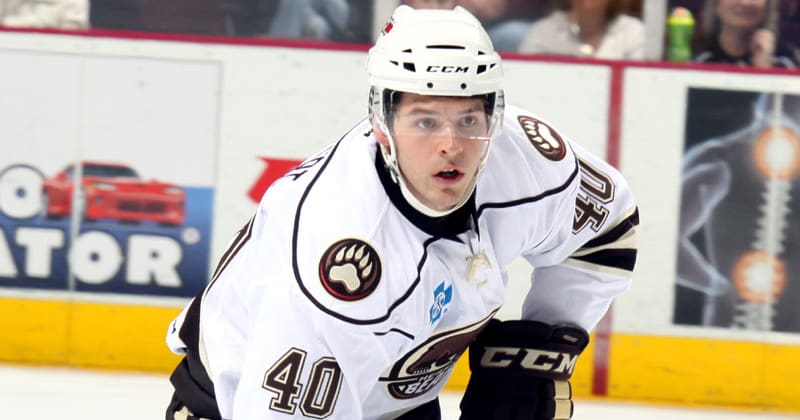 The Hershey Bears announced today that the club has signed forward Caleb Herbert, agreeing to terms on a one-year, American Hockey League contract.

Herbert, 28, returns to Hershey after spending parts of three seasons with the Bears from 2014-16. He tallied a goal and an assist in his AHL debut on Apr. 2, 2014 at Portland, earning 1st Star honors. He split time with Hershey, and the club's ECHL affiliate, the South Carolina Stingrays, over the next two seasons. In total, he played in 45 games with the Bears, scoring seven points (two goals, five assists). With South Carolina, Herbert skated under the direction of current Hershey head coach Spencer Carbery. He had 28 points (19 goals, nine assists) in 42 games with South Carolina in 2014-15, and added 14 more points (three goals, 11 assists) in 27 playoff games as he helped the Stingrays to the Kelly Cup Finals.

The 6-foot, 200-pound forward also has vast experience in the ECHL. He was named to the ECHL All-Star Game in 2019 as a member of the Utah Grizzlies. He completed the 2018-19 campaign by posting the best season of his professional career, finishing fourth in the league in both goals (32) and points (71), earning All-ECHL First Team honors. His 12 power play goals that season ranked tied for third in the ECHL. Herbert has 173 points (89 goals, 84 assists) in 168 career ECHL games with South Carolina, Idaho, Greenville, and Utah.

Herbert spent last season with Innsbruck HC in Austria, leading the club with 43 points, scoring 16 goals and 27 assists in just 48 games. The former University of Minnesota Duluth standout was selected by the Washington Capitals in the 5th round, 142nd overall, of the 2010 NHL Draft.