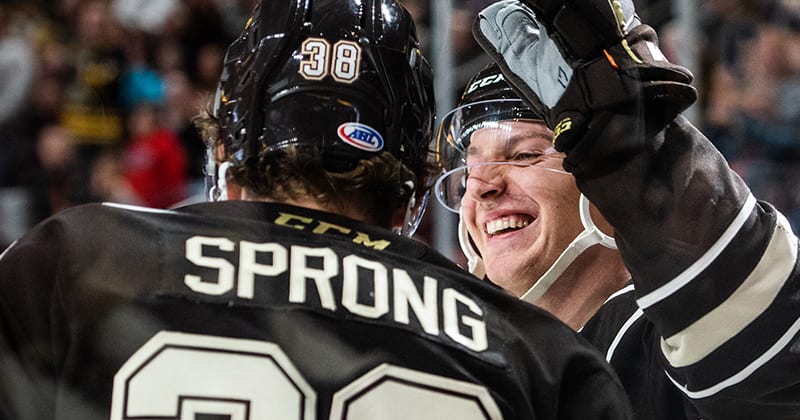 The Washington Capitals, the NHL affiliate of the Hershey Bears, have signed forward Daniel Sprong to a two-year contract. The announcement was made by Washington's senior vice president and general manager Brian MacLellan. Per the Capitals, Sprong’s one-way contract for both seasons will carry an average annual salary of $725,000.

Sprong, 23, was acquired by the Capitals from the Anaheim Ducks in exchange for defenseman Christian Djoos on Feb. 25. He joined the Bears and made an immediate impact, posting three points (one goal, two assists) in his Hershey debut, scoring the winning goal and earning 1st Star honors in the club's victory over Wilkes-Barre/Scranton on Feb. 29. He played in five games with Hershey, scoring six points (one goal, five assists). He skated in 44 AHL games last season with Hershey and San Diego, tallying 33 points (12 goals, 21 assists), while also scoring a goal and an assist for the Ducks in eight NHL contests.

In 109 AHL games between Wilkes-Barre/Scranton, San Diego, and Hershey, Sprong has scored 98 points (44 goals, 54 assists). A total of 14 of his goals have come on the power play while 10 have been game-winning markers. He was a member of the AHL's All-Rookie Team in 2017-18 with WIlkes-Barre/Scranton and also played in the 2018 AHL All-Star Classic.

The Amsterdam, Netherlands native enjoyed success at the NHL level in 2018-19. After a trade from Pittsburgh, Sprong scored 14 goals and five assists in 47 games with Anaheim. In 97 career NHL games between Pittsburgh and Anaheim, Sprong has 30 points (19 goals, 11 assists). Sprong was drafted by Pittsburgh in the second round, 46th overall, in the 2015 NHL Draft.