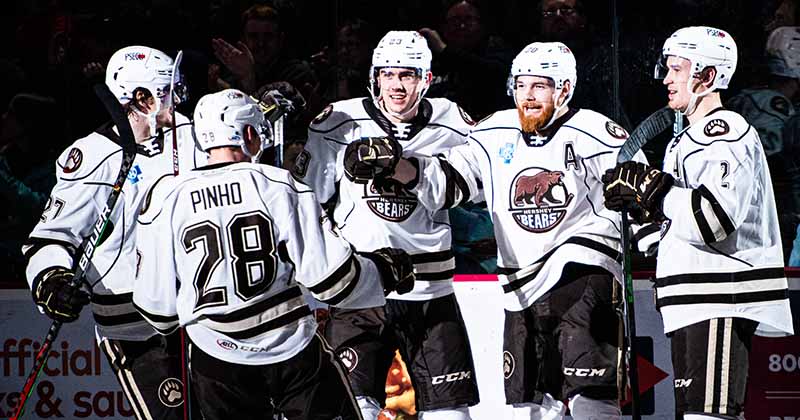 Hello Bears fans! Zack Fisch, the Voice of the Bears here, checking in with a Summer Mailbag article. Thanks for your questions and it’s great to hear from everyone. This is certainly a long and unpredictable offseason. Please stay safe, and keep posted to HersheyBears.com and our social media channels for updates on the 2020-21 season.

We’ve had some great news of late with the re-signing of Matt Moulson and the NHL returning to play. Who watched that entire 5OT Columbus/Tampa Bay game? Insanity. The longest game I’ve called was 3OT, so I can’t even imagine.

We’ll do more of these mailbags going forward, so send me your questions on Twitter @zackfisch or via email zasfisch@hersheypa.com.

Regarding any needs through free agency, the Bears have a lot of questions on defense. Right-handed defenders Erik Burgdoerfer (UFA), Tyler Lewington (UFA), Connor Hobbs (RFA), and Colby Williams (UFA), all would need new contracts, as would lefties Eddie Wittchow (UFA) and Lucas Johansen (RFA). With Fehervary possibly graduating to the NHL next year, adding new pieces on the backend, as well as working to retain some of the names above will be key.

Of Caps prospects set to turn pro in 2020-21, I’m excited to see Swiss winger Damien Riat in the organization next year. He’s put up good numbers (11-11-22 in 36 games) in the Swiss-A league, and had an impressive training camp last year for Washington.

@JosephSzymanski
Which Bears forward do you think is most likely to get a spot in DC next year? Or at least the ones most likely to get a chance?
I think Daniel Sprong is your most likely candidate to get a very good look in DC. While he’s still new to the organization, he has 97 games of NHL experience and has a lot of potential to be a scorer at the NHL level. After all, he did have 14 goals with Anaheim in 2018-19 and impressed management with his brief tenure in Hershey. Ilya Kovalchuk was brought in by the Caps at the trade deadline, but is a pending free agent, so if he is not retained, Sprong, who will be a restricted free agent, could be an option on the third line if he returns to the organization.

I do think Beck Malenstyn and Brian Pinho will get good looks from the Capitals as well. Beck saw a few games last year in DC, and we all know what he brings. He’s a relentless competitor and leaves it all on the line. Pinho will need a new contract, but he had a breakout season and was rewarded by joining the Capitals in the bubble in Toronto. His versatility to play wing or center also helps as he can fill in where needed.

@Rbloss64
With Matt Moulson returning, who is the next Bear you would like to see come back?
Matt Moulson returning in huge. I can’t speak enough about not only his play on the ice, but how helpful he is in the room for the young players. He is a fantastic leader and as he showed last year, he’s still an elite scorer and power play guy at this level.

I personally would love to see Eddie Wittchow return on the backend. He was exceptional after coming up from South Carolina. He added some offense to his game this year, but he is a player who defends well, has size, and hits hard. He’s also about one of the nicest guys you’ll ever meet off the ice and fit into the locker room very well.

@EmptyMaybe
Seems like an important season for Lucas Johansen. Outside of healthy, what do you hope he can accomplish in the upcoming season?
Johansen will be a restricted free agent, but if retained, this upcoming season will be a big one for him. With defensive prospects like Martin Fehervary and Alex Alexeyev in the pipeline, Johansen is looking to reestablish himself in the organization and show why he was taken in the first round by Washington in 2016.

In his rookie season in 2017-18 with Hershey, he showed glimpses of why he was a high pick. He had 27 points and won Hershey’s Rookie of the Year award despite a tough season for the Chocolate and White. Johansen is a smooth skater and has some skill in his game that we saw shine at times that year.

As you mentioned, injuries have derailed that momentum, as he was held to 45 games in 2018-19 and just nine games this past season. Johansen has admitted that he needs to work on being a stronger defender to earn NHL looks. That’s where there is a still a lot of room for growth. Before training camp in DC last year, he told reporters he was focused on that, and spent time training to be stronger to win battles. He will need to look to add a little more quickness in his decisions on the ice, and will need to make sure his first passes are strong. A long offseason should allow Johansen to return to full health, so I look forward to seeing what he brings to the table next year if retained.

@cswa11
How do you think the delay might impact the schedule for next season? Do you think UFA players may be more likely to sign back due to this?
At the recommendation of the AHL’s Return to Play Task Force, the Board of Governors has approved moving the anticipated start of the 2020-21 regular season to December 4, 2020, due to the ongoing COVID-19 public health crisis. The AHL will continue to work with its member clubs to monitor developments and local guidelines in all 31 league cities.

Details are still to be determined, and at this time, we appreciate your patience regarding information on the 2020-21 season. The Return to Play Task Force will provide guidance, and our staff is planning for all scenarios with safety as the top priority.

This timeline has moved Free Agency in the NHL back until mid-October, so things will just be fast and furious this year with movement. If anything, I think we could see bubble AHL or ECHL players look overseas rather than awaiting to see how things play out in North America. Various overseas leagues appear to be moving forward with earlier starts, so some players will certainly weigh those options.

@ChristianLapp2
Who was your biggest inspiration in becoming a broadcaster?
There have been several. My parents have always pushed me to chase this dream, and still are my biggest fans and supporters. Growing up in Kansas City, I listened to a lot of Kansas City Blades games during their International Hockey League days. Bob Kaser was their broadcaster and he was great. He’s now in Grand Rapids, and I’ve actually had a chance to work with him when we played the Griffins and that was a thrill. He’s such a nice guy too. Growing up, I listened to a lot of Chris Kerber, Ken Wilson, and John Kelly on St. Louis Blues broadcasts as that’s what we got on TV and radio in Kansas City. Doc Emrick is the gold standard, and I've always admired his work, and have been lucky to get to pick his brain during his visits to Hershey and DC.

In the last five years, John Walton has certainly been an inspiration for me. Working with the Caps organization since 2015, I have listened to a lot of John’s work, and as Hershey fans know, he’s one of the best. He’s also helped my career immensity with his tips, advice, and willingness to give me opportunities, including making my NHL Debut in 2018. I wouldn’t be in Hershey without his recommendation and help, and I still learn things from listening to him.

@canuckduck789
Hey Zack. What’s your favorite different/“quirky“ thing that the NHL has done with the re-start games? Big “hello” from #RockinJ - we miss you and we’re looking forward to hearing your great play-by-play again!
Good to hear from you, and thanks for the kind words. I missing seeing you, our fans, and of course, calling the action.

The NHL has done an exceptional job. The bubble has shown to be safe for players, and the league has gone above and beyond with little details. I personally loved that they put pictures of player’s families in their hotel rooms upon arrival. That is first-class.

I can’t get enough of the quirky, funny scoreboard messages at games. The crew there is having a blast with it, and the games look great on TV. Well done by the NHL.