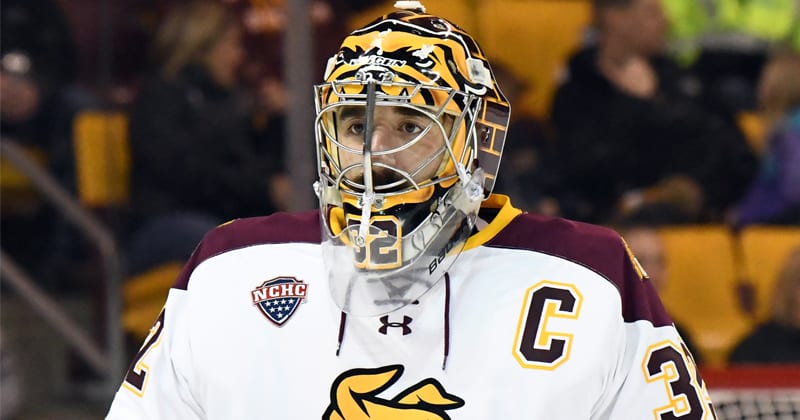 The Hershey Bears announced today that the club has signed goaltender Hunter Shepard to an American Hockey League contract for the 2020-21 season.
Shepard, 24, joins the Bears after a prolific college career at the University of Minnesota Duluth where he was coached by former Bear Scott Sandelin. The Cohasset, Minn. native guided the Bulldogs to back-to-back NCAA National Championships in 2018 and 2019, and the netminder started an NCAA-record 115 straight games from Oct. 21, 2017 to Mar. 7, 2020. The 6-foot-1, 210-pound goaltender served as a co-captain at UMD this past year, playing in 34 games, going 22-10-2 with a 2.18 goals against average, a .918 save percentage, and two shutouts. For the second straight year, he was named the National Collegiate Hockey Conference (NCHC) Goaltender of the Year, and also earned Second-Team All-American honors after landing First-Team All-American honors the year prior. Adding to his accolades, Shepard was also named the Bulldog's Most Valuable Player for the second consecutive year.

Shepard was dominant in the NCAA Tournament in his collegiate career, going 8-0 with a 0.97 goals against average and a .953 save percentage. He recorded a shutout in UMD's 2019 title win over UMass, stopping all 18 shots he faced. He finished his NCAA career with a 76-37-5 record in 119 games, ranking first all-time in UMD history in wins, goals against average (1.94), save percentage (.922), and shutouts (17). He was a three-time Mike Richter Award Finalist, and a three-time All-NCHC selection in his illustrious NCAA tenure.

Prior to UMD, Shepard was the 2015-16 North American Hockey League Goaltender of the Year with the Bismarck Bobcats, leading the league in games played (50), wins (34), and shutouts (8), while ranking second in goals against average (1.90). During his prep career at Grand Rapids High School, Shepard won the Frank Brimsek Award as the top senior netminder in Minnesota.