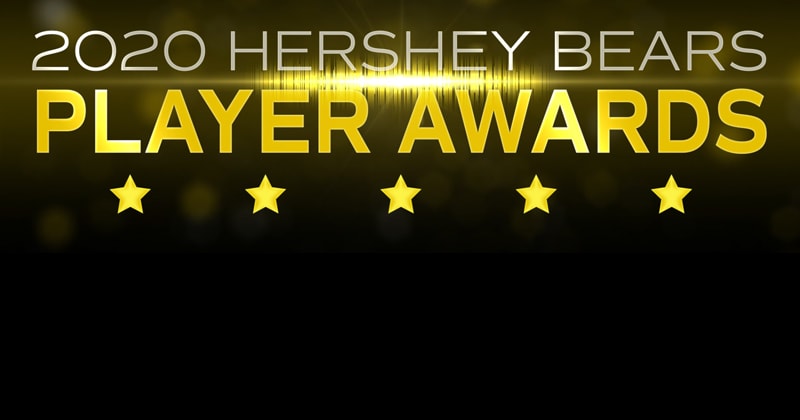 With the 2019-20 season being cancelled due to the COVID-19 pandemic, the Bears were unable to hold the annual Player Awards Night in April. However, the Hershey Bears are proud to announce the club's 2019-20 Player Awards winners virtually.

Hershey Bears AHL Man of the Year: #22 Kale Kessy
Kale Kessy was selected for this award for his contributions to the Central Pennsylvania community during the 2019-20 season. A leader in the club's Hershey Bears Cares initiative, Kessy was part of numerous charitable events, made children's hospital visits, and helped with the team's Roaring to Read program. A tough guy on the ice, Kessy's work in the community made him Hershey's nominee for the AHL's Yanick Dupre Memorial Award.

Kenny Smith Memorial Award: #26 Matt Moulson
The award is given out annually for the Hershey Bears player who earns the most "Three Stars of the Game" nominations during the season. Matt Moulson led the Bears in that category this year, including claiming four First Star nods for the Chocolate and White. In his first season with the Bears, Moulson led the club with 22 goals, scoring a team-best 11 times on the power play, and finished second on the team with 41 points in 62 games. This award is named for the former Boston Bruins and Hershey Bears great, Kenny Smith.

Arlene Tighe Award for the Bears Unsung Hero: #18 Garrett Pilon
Garrett Pilon recorded a strong sophomore season for the Bears, finishing the year with 36 points (18 goals, 18 assists) over 61 games. He added five power play goals, and the forward continued to work on the little parts of his game that don't show up on the scoresheet. The Arlene Tighe Award is chosen by the Hershey Bears Booster Club.

Dan Sernoffsky Most Improved Player Award: #28 Brian Pinho
The second-year forward had four goals and 12 points in his rookie season in 2018-19, but this past year, he posted a 37-point campaign, including hitting the 20-goal mark. He finished second on the team in goals, tied for first in game-winning goals (4) and led the club in shorthanded goals (4). This award is named after late Lebanon Daily News award-winning sports reporter, Dan Sernoffsky.

Jack Gingrich Award for Bears Rookie of the Year: #37 Bobby Nardella
It took some time for the blue liner to establish himself as a regular in the lineup, but once he did, Bobby Nardella made a giant impact for the Chocolate and White. He collected 31 points (four goals, 27 assists) in just 41 games. That's the most points by a Bears rookie defender since NHL superstar John Carlson had 39 points with the Bears during the 2009-10 season. This award is named after Jack Gingrich, a former Hersheypark Arena "Voice of the Bears" and an off-ice official in the AHL for almost 20 seasons before his passing in 1988. The award is chosen by the Hershey Bears off-ice officials.

John Travers/Steve Summers Award, Highest Plus/Minus: #2 Tyler Lewington
A stalwart on the backend, Tyler Lewington led the club with a +17 rating during the 2019-20 campaign, registering that mark over 43 games. This award is named after the pair of longtime Hershey Bears beat reporters.

Milton Garland Memorial Award for Bears Best Defender: #2 Tyler Lewington
After starting the season in the NHL with the Washington Capitals, Lewington rejoined the Bears for his fifth season in Chocolatetown, and guided a young defensive squad to become one of the best in the AHL. Lewington helped Hershey allow the second-least shots per game and the third-least goals per game this past year, while also racking up 13 points (four goals, nine assists) and 76 penalty minutes. He also played a large part in the second-best penalty kill in the AHL. This award is named after Mr. Milton Garland, who installed the ice making equipment at Hersheypark Arena.

PNC Bank Team MVP Award: #31 Pheonix Copley and #30 Vitek Vanecek
Netminders Pheonix Copley and Vitek Vanecek stood tall during the 2019-20 campaign. Copley finished 10th in the AHL in goals against average (2.47) while Vanecek ranked fifth (2.26). Copley went 17-8-6, while Vanecek was 19-10-1, collecting a career-best .917 save percentage. Both goaltenders recorded a pair of shutouts, and each played in 31 games. Vanecek earned his second consecutive AHL All-Star Classic nod, and while in Ontario, took home a share of the CCM Top Goaltender Award, as well as AHL All-Star Challenge MVP honors.