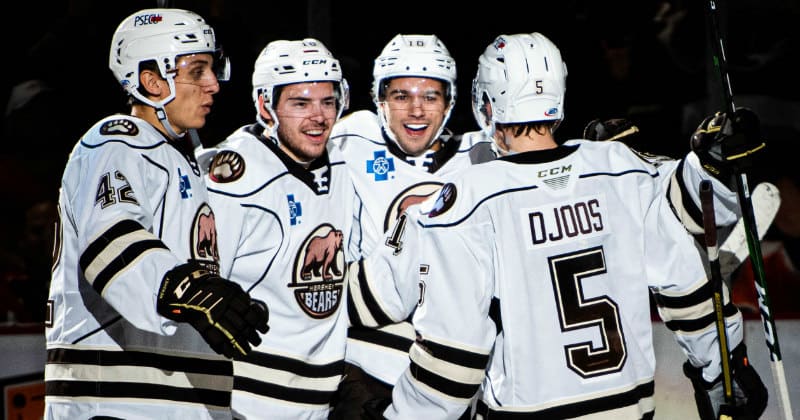 The Hershey Bears finished the shortened 2019-20 campaign as one of the American Hockey League's best teams, posting a 37-18-3-4 record, good for 81 points in 62 games. The Chocolate and White ranked 2nd in the Atlantic Division and Easten Conference, and 3rd overall in the AHL. Under the direction of second-year head coach Spencer Carbery, the Bears tied for first in the league for the most wins on home ice, going an impressive 21-8-1-2 at Giant Center. Due to the COVID-19 pandemic, the AHL cancelled the remainder of the season and 2020 Calder Cup Playoffs on May 11, marking the first time in Hershey's 82-season history that the club did not complete a full season.

MIGHTY MOULSON: Winger Matt Moulson came as advertised after signing a one-year, AHL contract with the Bears last July. The veteran of 650 NHL games served as an alternate captain with the Bears, leading the team in goals (22), power play goals (11), first goals of the game (7), and shots (172). He finished second on the team in points with 41, and was one of just two players to play in all 62 games during the shortened season. The 36-year-old played in his 1000th professional game on Jan. 24 at Springfield, scoring twice to lead the Bears to a victory on his milestone night. Moulson was also selected as a playing captain for the 2020 AHL All-Star Classic in Ontario, California, helping lead the Atlantic Division to a championship in the All-Star Challenge.

MAILLET LEADS THE WAY: In his first year with the Bears, forward Philippe Maillet added a strong offensive punch. After teaming up with Matt Moulson in Ontario the two prior seasons, Maillet moved his act to the Washington Capitals organization, signing his first NHL contract last summer, inking a two-year deal Jul. 1. The move paid dividends, as Maillet led the Bears in points (44) and finished tied for first with three other players in assists (27).

DYNAMIC DUO IN NET: The Bears benefited from having one of the American Hockey League's best tandems between the pipes. Netminders Vitek Vanecek (2.26) and Pheonix Copley (2.47) finished in the top-10 in the AHL in goals against average, ranking 5th and 10th respectively. Vanecek went 19-10-1 with a pair of shutouts, and his .917 save percentage was an AHL career-best. He was named to the AHL All-Star Classic for a second consecutive year, earning both the CCM Top Goaltender and All-Star Challenge MVP honors while in Ontario. Copley finished the season with a 17-8-6 record, collecting two shutouts and a .905 save percentage.

BRIAN BREAKS OUT: Second-year forward Brian Pinho enjoyed a standout campaign in 2019-20. After registering just 12 points (four goals, eight assists) in 73 games during his rookie season in 2018-19, Pinho enjoyed a large leap in offensive production in his sophomore year. The former Providence College star finished with 37 points (20 goals, 17 assists) while appearing in all 62 of Hershey's contests in 2019-20. Despite not being a fixture on the power play, Pinho was one of only two 20-goal scorers on the team, trailing Matt Moulson (22) for the team lead in tallies. Pinho led Hershey with three shorthanded goals, and finished tied for the team lead with four game-winning goals.

BOBBY BURSTS ON THE SCENE: It took some time for rookie defenseman Bobby Nardella to become a regular in Hershey's lineup, but once he did, the former Notre Dame standout became a key part of Hershey's attack. Nardella collected 31 points (four goals, 27 assists) in just 41 games, the most by a Bears rookie defender since current Washington Capitals star John Carlson posted 39 points in 48 games with the Bears in 2009-10. Nardella's .76 points per game was third in the league among rookie defenders. He finished with 13 power play assists, a mark that ranked tied for first on the Chocolate and White.

BRIGHT FUTURE ON BACKEND: With the guidance of experienced stalwarts like Erik Burgdoerfer and Tyler Lewington, Hershey's young defensive prospects shined bright in 2019-20. In addition to Nardella, Hershey's blue line also featured rookies Alex Alexeyev, Washington's 2018 1st round draft choice, and Martin Fehervary, the Capitals 2018 2nd round pick. Alexeyev notched 21 points (three goals, 18 assists) in 58 games in his rookie season, while finishing at +8. Fehervary struck for 14 points (four goals, 10 assists) for the Bears in 56 games. His plus/minus of +15 was third on the team to Lewington's team-best +17, and Brian Pinho's +16 mark.

WORLD RECORD HOLDERS: The Hershey Bears are once again the kings of the Teddy Bear Toss, besting their own world record this past December. The club held its annual CommunityAid and abc27 Teddy Bear Toss on Dec. 1, earning a 4-3 overtime win versus Hartford. Hershey defender Christian Djoos sent the stuffed animals flying to the ice with the game's opening goal midway through the first period, and in total, 45,650 teddy bears and stuffed animals were collected. Those teddy bears were donated to over 40 local charities, bringing smiles to children across Central Pennsylvania. A film crew from ESPN attended the event, and the Teddy Bear Toss was featured on ESPN's e:60 in February.

ODDS AND ENDS: Forward Mike Sgarbossa missed significant time with an injury, but had he been healthy all season, he may have competed for the AHL's scoring title. The veteran center had 40 points (13 goals, 27 assists) in 39 games...Forward Liam O'Brien was on pace to have a career-year prior to the season being cancelled. He had 29 points (10 goals, 19 assists) in 59 games, just one point off his career-best of 30 points, posted in 64 games in 2016-17...Kale Kessy led Hershey in penalty minutes with 102 and was one of just 13 players in the AHL to surpass 100 penalty minutes...Hershey went 31-14-2-3 in games versus the Atlantic Division.

UNDER CONTRACT: As of May 21, the following players from Hershey's roster are under contract with Washington for 2020-21 and could potentially return to the Chocolate and White next season. Forwards: Kody Clark, Axel Jonsson-Fjallby, Brett Leason, Philippe Maillet, Beck Malenstyn, Garrett Pilon, Mike Sgarbossa, Joe Snively, Riley Sutter. Defense: Alex Alexeyev, Tobias Geisser, Martin Fehervary, Bobby Nardella. Goaltenders: Pheonix Copley, Vitek Vanecek. All unlisted players are either unrestricted or restricted free agents. The NHL's and AHL's Free Agency period normally opens July 1, however, with the NHL looking to resume it's season at some point this summer, that is likely to change.