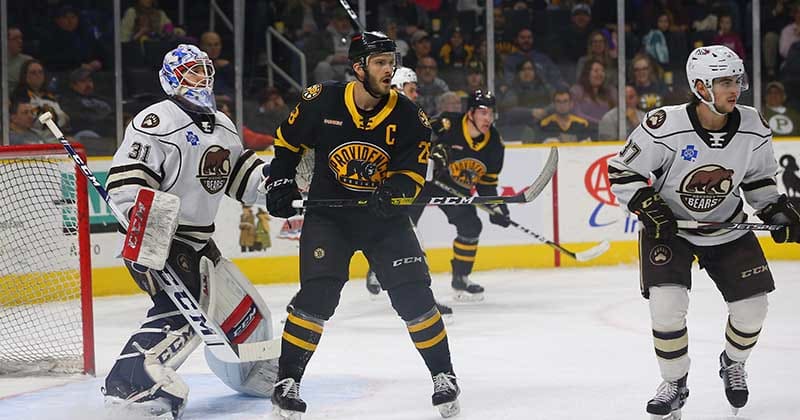 The Hershey Bears dropped a Sunday matinee contest to the Providence Bruins, 3-2 in a shootout, at the Dunkin' Donuts Center in the sixth and final game of the Bears-Bruins regular season series. Phoenix Copley stopped 23 of 25 shots in net for the Chocolate and White, and two of three shootout attempts. Hershey concludes the weekend claiming five of six possible standings points after winning on Friday and Saturday over Hartford, and remain in top spot of the Atlantic Division.

Providence broke the ice with the game's first goal at 9:28 on a low-to-high play in Hershey's defensive zone. Zach Senyshyn redirected a center point shot from Josiah Didier past Copley for the period's lone tally. Shots after 20 minutes were 7-5 Hershey with the P-Bruins leading 1-0.

Hershey's penalty kill impressed in the second period, but the Bruins extended their lead to 2-0. At 5:33, Jakub Lauko powered to the slot and beat Copley along the block side for his fifth goal of the season. Copley and Hershey's penalty killers highlighted a key 5-on-3 kill for a full 2:00 after Colby Williams and Liam O'Brien both sat for two minutes at 14:06. The Bears finished the afternoon a perfect 6-for-6 on the penalty kill. Shots after 40 minutes were even at 16-16 with the Bears trailing by two.

Down by two in the final period, the Chocolate and White mounted a dramatic comeback in the final two minutes to force overtime. With Copley pulled in favor of the extra attacker, Philippe Maillet brought the Bears closer with a net front tap in at 18:17. After the ensuing face-off at center ice, Hershey went back to work in the offensive zone and pulled Copley once more. With 2.2 seconds left, Daniel Sprong found Matt Moulson on a cross-ice feed, who scored into an open frame to tie the game at 2-2. The late game comeback and critical standings point ensured the Chocolate and White would conclude the weekend in first place of the Atlantic Division.

Sudden-death overtime did not decide a winner, and the game progressed to a three round shootout. Ryan Fitzgerald scored in the opening round for Providence, and Dan Vladar stopped all three Hershey shooters to hand the P-Bruins a 3-2 shootout decision. Vladar concluded the afternoon making 35 saves on 37 shots.

The Hershey Bears return to action with a Friday the 13th showdown on home ice against the Toronto Marlies. Hershey and Toronto are slated to meet for the second and final time in 2019-20, with the previous match up dating back to October. It's Scout Night and BOGO Kids Dippin' Dots at Giant Center. Puck drop is scheduled for 7 PM, and ticket information is available online at HersheyBears.com.