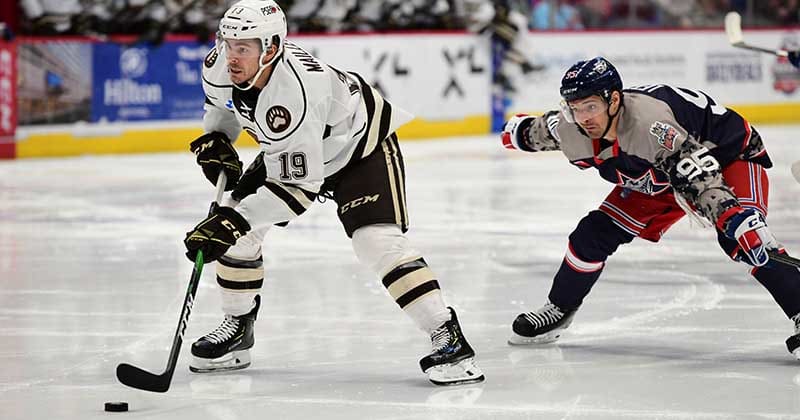 The Hershey Bears exploded for three goals in the second period to blow past the Hartford Wolf Pack, 4-1, on Saturday night at the XL Center. Vitek Vanecek stopped 26 of 27 shots for his second consecutive win over Hartford. The Bears conclude their six game season-series with the Wolf Pack with wins in four meetings (4-2-0-0).

Following a scoreless opening period, the Chocolate and White posted a crooked number in the first 10 minutes in the second frame. Matt Moulson started the scoring only 52 seconds into the new period to provide his team a 1-0 advantage. Brian Pinho threw a shot on goal from the right wing, and Jean-Francois Berube dropped the rebound on the doorstep. Moulson deposited the loose biscuit for his team-leading 21st goal of the season.

At 3:48, Hershey capitalized on their second power play chance of the night to double their lead. Hartford's Ty Ronning was guilty for slashing at 3:29, and less than 20 seconds later, Philippe Maillet redirected a perfect feed from Daniel Sprong. The Bears' lead stretched to 3-0 at the 9:05 mark to chase Berube from the game for the Wolf Pack. Berube was relieved by Adam Huska, who stopped all 14 shots faced in the remainder of regulation. Bobby Nardella recorded his third assist of the night by setting up a Brian Pinho snipe for his 20th goal of the season. Shots after 40 minutes were 24-18 Hershey.

Protecting a 3-0 lead in the third period, Hartford finally solved Vitek Vanecek once to spoil the back-to-back shutout attempt. After a failed 3-on-1 rush attempt, Nick Jones scored on a recycled play at 12:03 to break the shutout and inch the Wolf Pack closer. Down the stretch, Hartford pulled Huska for the extra attacker, but Tyler Lewington scored into the empty net at 19:59 to round out a 4-1 final.

Shot totals finished at 33-27 in favor of Hershey. The Bears' special teams finished 1-for-4 on the power play and 2-for-2 on the penalty kill. Hershey's record improved to 37-18-3-3 with the victory to increase their point total to 80.

The Hershey Bears return to action and conclude three games in three days tomorrow afternoon against the Providence Bruins. The Bears and Bruins will conclude their six game season series with a 3 PM matinee at the Dunkin' Donuts Center. Voice of the Bears Zack Fisch will have the call on the Bears Radio Network.