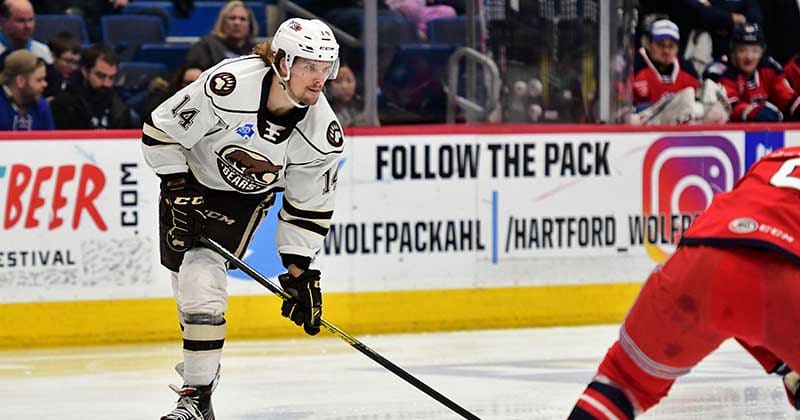 Eddie Wittchow snapped a scoreless tie at 14:12 of the third period to lift the Hershey Bears to a 1-0 road win over the Hartford Wolf Pack on Friday night at the XL Center. Vitek Vanecek shined in goal, stopping all 30 shots faced to record his 11th career AHL clean sheet. Vanecek's shutout ties him for seventh all-time in Hershey Bears franchise history with Philipp Grubauer.

In a scoreless opening 20 minutes, the Chocolate and White were tasked with two early penalty kills. Wittchow received two minutes for instigating, five minutes for fighting, and a 10 minutes misconduct at 6:33 of the first period. Daniel Sprong served both Wittchow's two minute minor, as well as a Bears bench minor for too many men at 8:49. The Bears killed both early Hartford power plays, and finished the night 3-for-3 on the kill. Shots after 20 minutes were 10-7 Hershey, and 13-10 Hartford after 40 minutes of action.

Scoreless in the third period, Shane Gersich forced a turnover along the dasher boards and fed Brian Pinho behind the cage. Moving away from pressure, Pinho found Wittchow positioned at the left point. A blast from the blue line pinged the crossbar and deflected into the net for the game's only goal, and Wittchow's fifth tally of the season. Hershey's 1-0 win stood despite being out shot 30-17 after 60 minutes. The 17 shots for the Chocolate and White is a new single game season low.

The Bears record improved to 36-18-3-3 courtesy of the victory, and handed Hartford only their fourth regulation loss on home ice this season.

The Hershey Bears rematch the Hartford Wolf Pack tomorrow night at the XL Center. Puck drop is scheduled for 7 PM in the sixth and final meeting of the season series between the Bears and Wolf Pack. Voice of the Bears Zack Fisch will have the call on the Bears Radio Network.