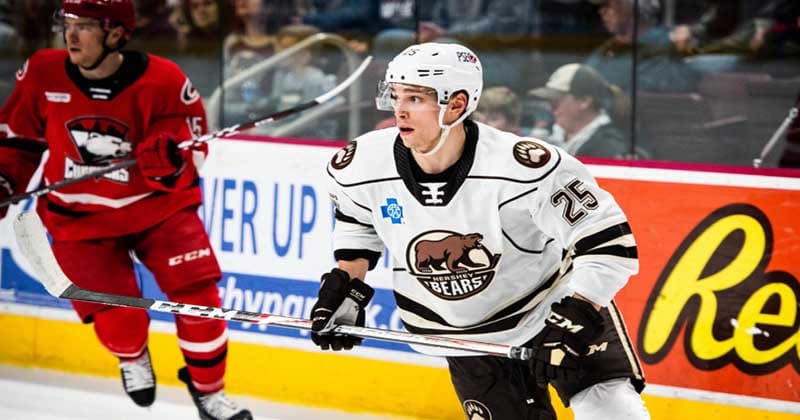 Joe Snively scored his first professional hat-trick to help the Hershey Bears to a 6-1 win over the Charlotte Checkers on Tuesday night at Giant Center. Charlotte's Derek Sheppard and Hershey's Kale Kessy engaged in a fight at 11:30 of the second period. In the fight, Kessy lost, but regained consciousness on the ice. He was alert, in stable condition when leaving the ice on a stretcher, and was transported to a local medical facility. The game continued after a delay with both teams leaving the ice, and the second period resumed at 9:13 PM. A further update on Kessy's health will be provided when one becomes available.

Snively opened the game's scoring with his first of three goals at 4:02 of the opening period. Matt Moulson kicked a loose puck in the low-slot to the backdoor, for Snively to bury into an open frame. Morgan Geekie evened the score for the Checkers at 11:04 on the power play. Jake Bean fired a shot from the center point, and the puck caromed to Geekie near the left post to beat Vitek Vanecek. Hershey's penalty kill finished the night 4-for-5. Before the period expired, Bobby Nardella scored the eventual game-winning goal at 15:34 to put the Chocolate and White ahead for good.

Snively tallied his second goal of the night at 3:19, and Shane Gersich extended Hershey's lead to 4-1 at 11:22 after dishing home a loose puck sitting in the blue paint. Snively completed the hat-trick at 17:34 of the second period after burying a breakaway chance past Charlotte goaltender Jeremy Helvig. Shots after 40 minutes were 25-12 Hershey.

Brian Pinho completed the scoring with the third period's lone goal at 12:10. Down a man, Pinho tallied his team-leading third shorthanded goal of the season to extend his team's lead to 6-1. Final shots on goal finished at 30-23. The Bears improved their overall record to 34-17-3-3.

The Hershey Bears return to action and conclude February on Saturday night against the Wilkes-Barre/Scranton Penguins at Giant Center. Puck drop is scheduled for 7 PM. Ticket information is available online at HersheyBears.com.