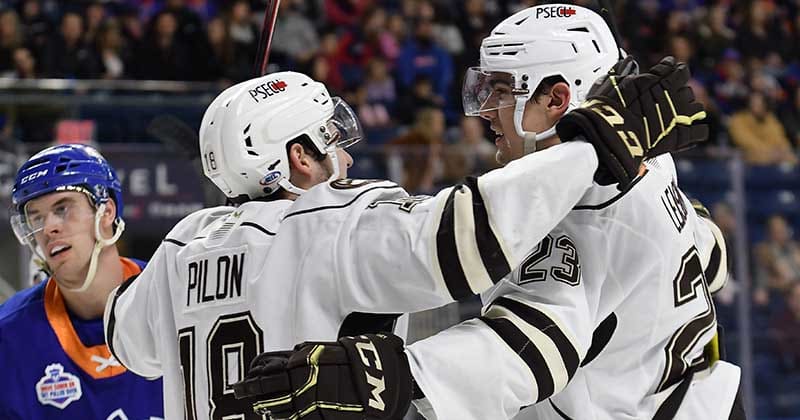 Both the Hershey Bears and Bridgeport Sound Tigers overcame two-goal deficits, but the Chocolate and White scored a 5-4 shootout win on Saturday night at Webster Bank Arena. Garrett Pilon, Brian Pinho and Brett Leason all scored three minutes apart in the second period to highlight Hershey's comeback. Hershey concludes their six-game season series against Bridgeport with a 5-1-0-0 record.

The Sound Tigers entered Saturday night with the worst ranked power play in the American Hockey League, but managed to strike three times on Hershey's top ranked penalty kill. Kale Kessy received an unsportsmanlike conduct minor at 2:14 of the opening period, and Matt Lorito soon opened the scoring on the man-advantage. On the rebound of a Mason Jobst shot, Lorito poked the rebound into an open frame at 3:55. Oliver Wahlstrom added Bridgeport's second power play goal of the period at 10:52 after blasting a shot past Vitek Vanecek from the left wing.

Before the period expired, Hershey converted to cut their deficit to 2-1. Brian Pinho scored his first of two goals on the night after potting an Alex Alexeyev rebound into the cage at 15:19. Shots after 20 minutes were 13-6 Bridgeport. The Sound Tigers started the game on a 10-0 shot run.

Hershey quickly turned the tide in the second period, and their scoring outburst began on the power play. Cole Bardreau received a cross-checking minor at 15:11, and Pilon buried his 17th goal of the season at 15:22 from between the face-off circles. Only 61 seconds later, Pinho went to the net and cashed in on a lively rebound to provide the Chocolate and White with their first lead of the night. In similar fashion, Brett Leason tallied at 18:22 on Bridgeport goaltender Christopher Gibson to extend Hershey's streak of four unanswered goals. Falling down to the ice off-balanced, Leason deposited a rebound into the net for his third goal of the season. The Bears led after 40 minutes, 4-2. Bridgeport led in shots, 23-18.

Despite the Chocolate and White out shooting the Sound Tigers 12-4 in the final period of regulation, Bridgeport rallied to draw even at 4-4. Martin Fehervary was guilty of hooking at 2:11, and Colin McDonald soon scored on a deflection at 4:02 in his 900th professional game. With 2:22 remaining, Simon Holmstrom forced overtime with his eighth goal of the season, beating Vanecek along the left wing.

Sudden-death overtime did not solve a winner, and both teams progressed to a three round shootout. Philippe Maillet and Christian Djoos both converted in Round 1 and Round 2, Wahlstrom countered with a goal in Round 2, but Vanecek denied Holmstrom in Round 3 to hand Hershey the 5-4 victory.

Hershey's record improves to 33-17-3-3 in the shootout victory and extends their Atlantic Division lead to three points over the Hartford Wolf Pack.

The Hershey Bears return to action on Tuesday night, Feb. 25 at Giant Center against the Charlotte Checkers. It's Hersheypark Pass Night, where all fans will receive a Hersheypark Pass, valid for one-day admission through July 31, 2020. Puck drop is scheduled for 7 PM. Tuesday's game will also be televised on abc27.3, and can be viewed on cable Comcast 245, Verizon 462, Blue Ridge 152, Nittany 227, and Kuhn 69. Ticket information is available online at HersheyBears.com.