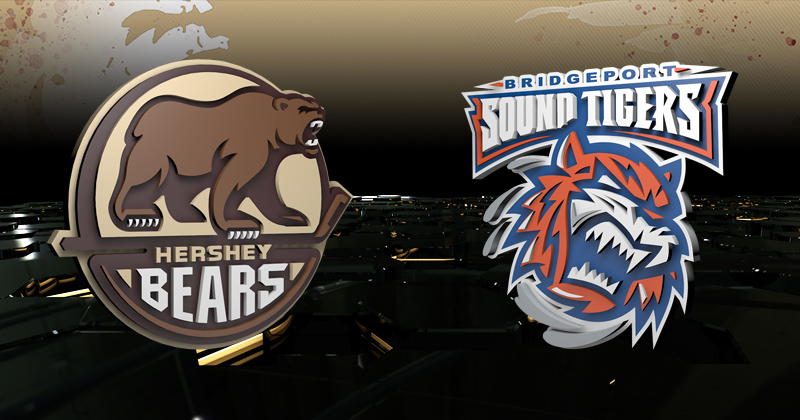 Tonight, the Hershey Bears conclude their six-game season-series against the Bridgeport Sound Tigers. The Bears enter with a 4-1-0-0 record against the Sound Tigers in 2019-20, including 1-1-0-0 inside Webster Bank Arena.

LAST TIME OUT:
The Hershey Bears look to rebound after dropping a slim, 2-1 decision last night to the Wilkes-Barre/Scranton Penguins. Axel Jonsson-Fjallby scored Hershey's lone goal at 17:13 of the opening period after wiring a shot past Pens goaltender Casey DeSmith. Kevin Roy tallied a breakaway goal on Pheonix Copley to even the score at 19:39 of the second frame, and Kevin Czuczman gave Wilkes-Barre/Scranton the go-ahead marker on a strike at 3:48 of the third period. The Bridgeport Sound Tigers were last in action on Wednesday night, and dropped a wild, 8-5 affair to the Lehigh Valley Phantoms at Webster Bank Arena. Otto Koivula, Grant Hutton, Robert Carpenter, Travis St. Denis, and Jeff Kubiak all scored for the Sound Tigers.

BYE BYE BRIDGEPORT:
Tonight marks the final game of the six-game season series between Hershey and Bridgeport. The Bears have gone an impressive 4-1-0-0 in the previous five games. The Bears lone loss came at the Webster Bank Arena in the first meeting this season on Nov. 23, but since then, the club has rattled off four straight wins versus the last-place Sound Tigers. Both Matt Moulson and Philippe Maillet led the way with two goals and four assists versus the Sound Tigers this season, while Shane Gersich has scored four of his nine goals this season versus Bridgeport. The Bears have outscored Brent Thompson's team in the season series, 17-9.

STREAKS SNAPPED:
Last night's defeat snapped Hershey's six-game road point streak dating back to Jan. 24 at Springfield. The Bears previously won five consecutive road games away from Giant Center before dropping a 4-3 overtime decision to the Binghamton Devils on Feb. 14. During the previous road point streak, Hershey won at Webster Bank Arena over the Bridgeport Sound Tigers on Jan. 31 by a 4-1 count. Last night, Hershey also saw their six-game power play goal streak come to an end after going 0-for-4 on the man-advantage. Previously, the Chocolate and White tallied at least one power play goal in each game dating back to Feb. 7 at Wilkes-Barre/Scranton. During the run, Hershey went 9-for-28 in the stretch, good for 32.1%.

TIGER TRANSACTIONS:
On Thursday, the Bridgeport Sound Tigers saw numerous roster additions and deletions. Forward Cal Clutterbuck has been assigned to Bridgeport on a conditioning loan from the New York Islanders. Clutterbuck last played in the AHL in 2008-09, appearing for two games with the Houston Aeros on Oct. 11 and Oct. 13, 2008 against the Chicago Wolves and Milwaukee Admirals. In the decade since, Clutterbuck has appeared in 820 career NHL games, totaling 236 points (120 goals, 116 assists) with the Minnesota Wild and Islanders. In addition to Clutterbuck's assignment, forward Kieffer Bellows was also returned on loan from the Islanders on Thursday. Bellows has three goals in four games against the Chocolate and White this season, and was held off the scoresheet in five meetings versus Hershey in his 2018-19 rookie campaign. Forwards Otto Koivula and Andrew Ladd were both recalled by the Islanders on Thursday.