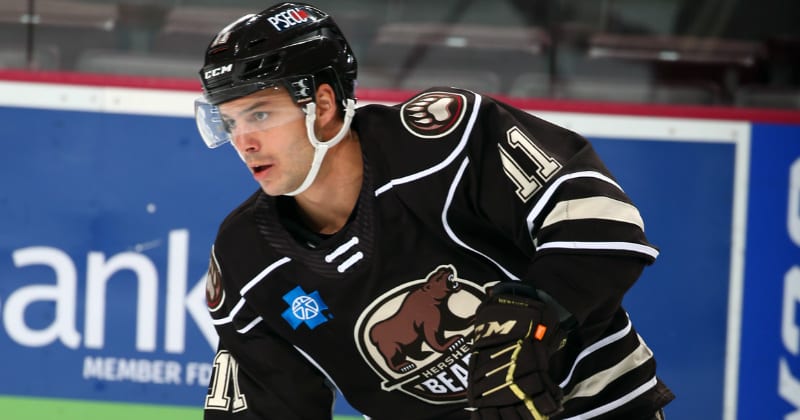 The Hershey Bears announced today that forward Steve Whitney has been re-assigned to the club's ECHL affiliate, the South Carolina Stingrays.

Whitney, 29, has been out of Hershey's lineup with an injury since Nov. 16. In 14 games this season with the Bears, Whitney has collected four points (two goals, two assists). He appeared in 60 games last season with the Chocolate and White, tallying 16 points (nine goals, seven assists). He also had three points in nine Calder Cup Playoff games, tallying a goal in Hershey's decisive Game 5 victory over Bridgeport in the opening round. In his AHL career with Norfolk and Hershey, Whitney has 47 points (24 goals, 23 assists) in 147 games.

The Boston native played the 2017-18 season with South Carolina, finishing second on the team in points (54) and goals (18), and finishing tied for first on the club in assists (36). He's played in 150 career ECHL games with Florida, Norfolk, and South Carolina, scoring 125 points (49 goals, 76 assists). A former standout at Boston College, Whitney won the National Championship with the Eagles in 2010 and 2012, and was named the recipient of the Walter Brown Award his senior year, an honor given to the top American-born college hockey player.