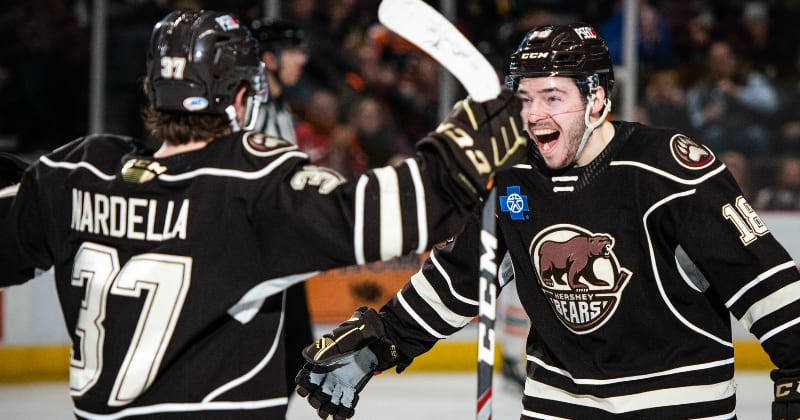 The Hershey Bears went 1-1-1-0 over three games last weekend, and the club enters this week in first place in the Atlantic Division, and second in the Eastern Conference. After two straight three in threes, the Bears play just two games this upcoming weekend, visiting I-81 foe Wilkes-Barre/Scranton on Friday before heading to Bridgeport to battle with the Sound Tigers on Saturday evening.

Last Friday, Hershey dropped a 4-3 contest in overtime at Binghamton. Hershey saw 2-0, and 3-2 leads evaporate as the Devils rallied with the goalie pulled to tie the game late in the contest. Despite two power play goals from Garrett Pilon, Binghamton’s Micheal McLeod gave the Devils the win, scoring 30 seconds into overtime.

The Bears and Devils squared off on Saturday at Giant Center in the back half of a home-and-home, with Binghamton doubling-up Hershey, 4-2. Matt Moulson and Philippe Maillet had Hershey’s goals in the loss.

In Sunday’s weekend finale, Hershey upended Lehigh Valley at Giant Center, 5-3. Defender Bobby Nardella broke a 2-2 tie in the third period, and Beck Malenstyn added the eventual game-winning goal to give Hershey its eighth win over Lehigh Valley in 10 head-to-head contests this season.

PILON PILES ON: Forward Garrett Pilon collected a pair of multi-point games last weekend to move his season total to 34 points (16 goals, 18 assists), good for fourth on the team. Pilon has already surpassed the 33 points he compiled in his rookie campaign in 2018-19, accomplishing the feat in 18 less games. Pilon tallied his second career multi-goal game last Friday at Binghamton, and the forward tallied two assists last Sunday for his seventh multi-point game this year.

THE NARD DOG: After two helpers in last Friday’s loss, rookie defender Bobby Nardella notched a goal and an assist in Sunday’s win versus Lehigh Valley. The Notre Dame product has 25 points (three goals, 22 assists) in 33 games this season. His .76 points per game is 2nd among all rookie defenders in the AHL with 15 or more games played. Nardella has 11 assists on the power play this season, good for fourth among all AHL first-year players. He enters this week with points in five of his last six games.

BEARS BITES: The Bears have scored first in six straight games. Hershey is 23-5-1-1 when scoring the game’s opening goal…Matt Moulson has scored the game’s first goal six times this season, good for second most in the AHL…Defender Christian Djoos has points in six straight games, scoring nine points (two goals, seven assists) over those contests…Beck Malenstyn scored his seventh goal of the season last Sunday, matching his total over 74 games in his rookie season.